The topic of sex has a way of creating cringeworthy moments in our society.

Rather than dealing with this uncomfortableness or perhaps a little red-faced embarrassment, we seem to have collectively decided to keep sexual discussions “hush hush”.  In some circles, the topic is completely swept under the rug; and those who violate the silence risk being scorned.

It’s unfortunate, too, because sex is obviously an important part of adult life.  The inability to be open and expressive about it can create confusion, unanswered questions, and even more social awkwardness that lingers for some time.

The game developers at Friskyware LLC are out to change all this with the creation of ROMP: an engaging card game that challenges taboos and gets people talking and laughing about sex. 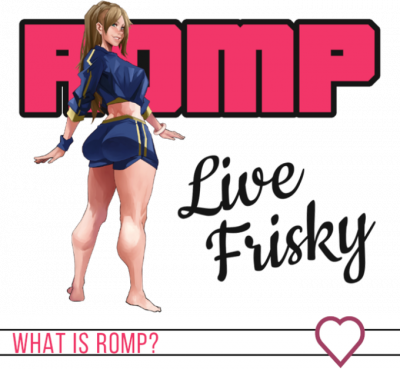 ROMP is fun, easy to play, and sure to ease the tension.  It’s designed to create a social atmosphere that isn’t awkward or forced – whereas other similar games virtually force players to do uncomfortable things.  This results in a more relaxed and enjoyable social gathering.

All that’s needed to fire up gameplay is 2-8 adults, a timer, something to draw with, and of course a ROMP deck.  It combines strategic and social elements (many of which players will already be familiar with) that are centered on fun sex-themed topics – all of which work together to create a more accepting and educational sexual environment.

Many players will be drawn to the ROMP deck through its stunning artwork – which is perhaps the most seductive ever seen in a tabletop card game.  Artist Mirco Gravina, also known as yo-nashi, is responsible for handcrafting our alluring game characters.  During his 3 years as a DeviantArt community member, his profile has attracted over 59,684 pageviews and 3,757 watchers.

This Kickstarter campaign is now Friskyware’s primary focus, with a goal, soon after, to bring the game to the mass market.  This should coincide seamlessly with Gravina’s completion of all game art, which is estimated to be completed by July 2019.

Readers can check out the ROMP Kickstarter campaign by visiting http://kck.st/2FsSB9F, and contribute for great rewards that include First Edition copies of the game.  The Friskyware team can also be reached directly via email at cory.swauger@friskyware.com.