Developers create some pretty awesome software. Before the end user ever sees it, though, the coding goes through plenty of testing. Unfortunately for the software developer, this can be a time-consuming process. Many testing solutions use white box techniques, which can result in correct lines of code being marked as incorrect and require developers to spend extra time double checking the code. Luckily, devmate can help.

To use devmate, developers simply install the software on their computer. It doesn’t require users to upload the code, so they’re free to work within their own secure network environment. Unlike other testing solutions that use white box techniques, devmate uses black box techniques that check the code to see if specifications have been met and only reports the errors. Devmate reduces error feedbacks, improves test coverage and offers safer refactoring. 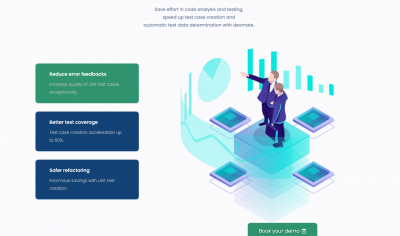 Devmate includes a variety of features to help software developers save time and improve the quality of their software.

With devmate, developers get code coverage as well as practical test cases that help validate that their code meets the necessary requirements.

Interested?
Don’t spend more time than necessary running unit tests. With devmate, you can quickly and easily create test cases and generate test code. Devmate even says it can accelerate test case creation by up to 50%, saving developers time and effort. You can check it out for yourself at devmate.software.