A New Utopia for the Digital Consumer

We’ve never been more connected – or more vulnerable – than we are today.

Digital communication and social media have opened us up to an incredible world of interaction and information; but they’ve also put our personal information out there more than it’s ever been.  From Facebook, to Whatsapp, to email, governments have control over it all – exploiting our consumer data so that they can control us, and so that large corporations can make more money.

Unfortunately, it doesn’t end there.  Even all of your more sensitive information – like illicit web searches or secretive conversations you’ve had – is in possession of the powers that be.  Your digital weaknesses are sitting there waiting to be exploited, potentially causing irreversible harm to your reputation.

The early days of the internet just felt so much more free and controlled by the people; now, control has almost entirely shifted towards the governments and corporations secure.  The time has come to take power back from the dirty side of the internet, and create a new Utopia.

Utopia is a new digital ecosystem that will change the way the world communicates and handles financial transactions.  It allows you to send instant text & voice messages, transfer files, create group chats & channels, and even do business – with all the protection and anonymity you thought was no longer possible with today’s internet.

What sets Utopia apart is its unique decentralized peer-to-peer network architecture, with no central server involved in data transmission or storage.  This means that there’s no single point of failure that will stop the entire system from functioning, and that messages and files will never be stored on a third-party servers.  The platform’s advanced encryption ensures even more security, providing an interception-proof communication channel to all Utopia users.

It’s all driven by Crypton: a proprietary cryptocurrency that drives all transactions over Utopia.  Cryptons are 100% secure and cannot be manipulated by governments or organizations, are safe for merchant use, and will not slow down your device performance.  Plus, they can be earned while using the Utopia software – giving anyone the incentive to dive into Utopia.

Utopia also consists of uWallet (a Crypton e-wallet), uMaps (a channel search feature), and the Utopia Name System (a decentralized registry of names).  Here are just a few more factors that allow the platform to stand alone in the internet privacy world: 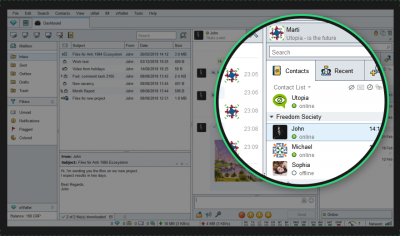 The company was founded in 2013 by a team of developers called the The 1984 Group – consisting of top-notch professionals in almost every IT field.  Their versatile skill set covers software, network engineering, cryptography, and many other areas.

Utopia is now in beta as the team continues to listen to early user feedback in order to optimize the platform.  The 1984 Group is encouraging new participants to join in as they look to improve project functionality and public awareness even more.

To learn more about Utopia or to be considered for the beta, we invite you to visit https://beta.u.is/.  The team is also available via email at admin@cryptohill.io.