You’re a startup. You have big dreams and a small budget. You’ve read all of the articles and e-books on lean startups, so you don’t over-invest. And the great news? Your idea is starting to take off! You have users on your software / buyers for your product. You’re starting to gain some momentum.

This is a critical point for a startup because, at the same time, you’re rapidly developing and deploying to keep improving and building on that momentum. Your startup starts to feel like a circus act (you know, the one where the the performer sits on a unicycle and spins a bunch of plates). But what happens when one of your plates spins out of control and crashes to the ground? 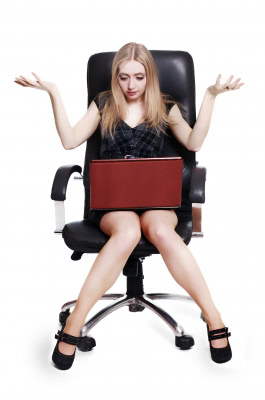 You’re a startup. You’re shooting for the moon with the resources to build a cardboard rocket ship. Missteps are inevitable. What’s important is how you handle them.

The reason I’m writing this particular article for this particular blog is because my company, MarketMeSuite, made a blunder not too long ago that was caught by KillerStartups. The mistake was that in testing a feature of MarketMeSuite, we wound up sending out 10 similar posts through our Twitter feed in less than 5 minutes. The author, a MarketMeSuite user, rightfully called us out on it. But how we reacted was key.

Fortunately, I’ve managed to learn a thing or two along the road of “startupdom” so, upon reading the article, I immediately commented, owned the mistake, apologized, and explained what happened. I was open and honest about the fact that we are a growing startup, and some internal testing went onto our main Twitter stream inadvertently. In turn, KillerStartups posted my comment to the post right away. I went a step further and did a little damage control by replying to everyone who Tweeted the article, directing them to my comment in the most non-defensive way that I could. 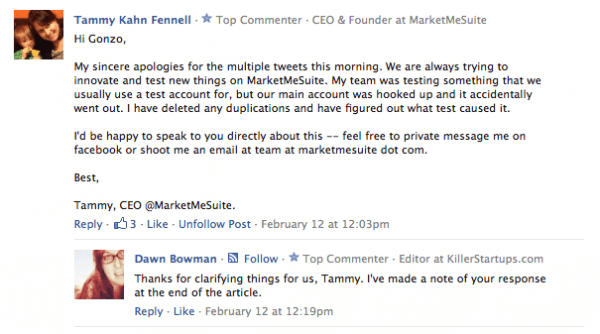 The negative publicity actually brought us a bunch of new users and I was asked to do the guest article you’re reading right now.

We all work extremely hard to get our startups off the ground and, when we’re criticized, it’s easy to take it personally, panic, be defensive or all of the above (especially if your brain is fueled mostly by caffeine and that microwaved burrito you had at 3 in the morning). In our earliest days I had a tendency to take things very personally and react in a way that could end up doing more harm than good. It’s hard to accept criticism with grace, but it’s key to your survival as a startup because, no matter how hard you try, you can’t be perfect.

It’s Up to You to Control the Conversation

I know a great company called “Equiso.” They have a really cool product that turns any TV into a “Smart TV.” Their tagline: “Make Your Dumb TV Smart.”

They were a Kickstarter success story, raising $250,000 from backers. But they soon found their Kickstarter backers had very high expectations. And they were having a little trouble keeping up with demand and controlling the conversation. That led to some bad publicity. But rather than fight back and get defensive, they’re doing a great job of working to fix the problem. Knowing that their fan page was the primary way people contacted them, they posted a message owning their shortcomings and explaining how they would be handling things moving forward. It got 20 likes in the time it takes to say “Equiso.” 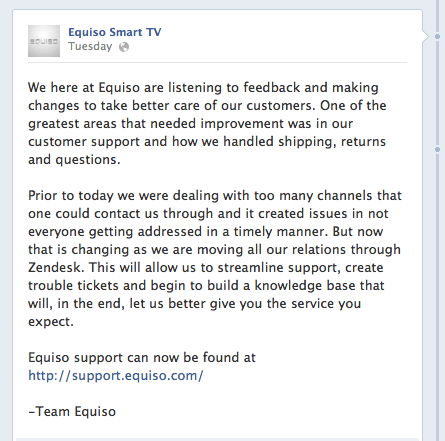 It takes guts to own your mistakes and sometimes you’re just going to have to swallow your pride. Remember that your users and customers don’t know the journey you’ve taken, the time and sacrifices you’ve made to get your product out the door. They want and deserve a product that “does what it says it does.” But, they’re also human. If you’re honest when you come up short; if you’re proactive in communication and managing expectations, you’ll be well on your way to turning the situation around. Handled correctly, a mistake can actually help make you into a Killer Startup, and not be a Startup Killer.

Tammy Kahn Fennell is CEO and co-founder of MarketMeSuite, a leading social media platform for small and mid-sized businesses. Tammy launched MarketMeSuite in late 2009 after many years of experience marketing her own small business online. Recognizing both trends in social media and the needs of SMBs, Tammy realized an opportunity to help others easily manage & monitor their social media presence, find targeted leads, build engagement and measure the ROI of their social marketing activities. Today the easy-to-use, affordable platform has over 30,000 users. As the owner and editor of the community driven blog, WeAreSocialPeople.com, Tammy writes frequently on social media and small business topics. She also shares her knowledge and advice with thousands of SMBs via radio, Web seminars and live presentations.