Moshpic Founders Talk Sushi, Bootstrapping, And The App That Lets You Sync And Share Photos On iPhone

Los Angeles is a wonderful city. Friends and strangers regularly tell me differently though. In fact, as recently as this morning I met a fellow who told me how much he didn’t enjoy the city. Having lived in two foreign countries, Manhattan, and Brooklyn the reactions surprise me considering what L.A. has to offer although I also believe that if you can’t feel what makes the city special, then it’s not for you.

In addition, one thing outsiders can’t deny about Los Angeles is the emergence of a significant startup culture that is a significant player in the world of entrepreneurship. One L.A. startup making waves right now is Moshpic.

Moshpic is an app that allows users to share photos on iPhone through a private network instead of contacts. The alternative is to share photos via Facebook, Twitter, Instagram, or Pinterest which is to flood photos to world which isn’t always desirable. Instead, Moshpic allows you to share and trade photos or groups of photos (called stacks in Moshpic) with specific people. Of course, there’s an ability with the app for the user to comment on the photos.

Moshpic creates more an intimate setting by which the user can share photos with select friends or families.

We recently had a chance to speak to Moshpic founders Chris Macho and Chris Ozenne about their app, Los Angeles, and getting to Hawaii. Here’s what they share with us: 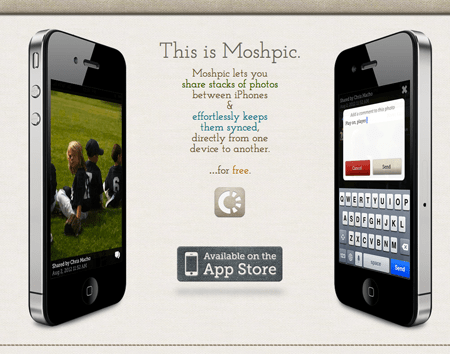 So, tell me how you first came up with the idea for Moshpic and also why you chose the name?

The original idea for Moshpic was to enable a large crowd of people to contribute to centralized group albums (or ‘stacks’ as we call them) specifically for concerts, sports events, political rallies, etc.

The name Moshpic is sort of like the word “Moshpit”. Although a Moshpit is a bunch of people aggressively ‘dancing’ to hard rock music, to us it just kind of sounded like a good word for the product. You think ‘mashup’ and ‘pictures’ and that’s what we were kind of going for. And with the concert angle for the product, it works well.

However, we made a pivot as we got deeper into development and decided that Moshpic could serve a better purpose as a private group sharing tool. The name still works: the albums created are still authored and contributed to by an amalgamation of users that have photos from the same event or theme. (Essentially it’s still a mashup of photos) The only difference is, with the private Moshpic, you’re more likely to know all or most of the people in your stacks.

And when did it go from being an idea to a company you wanted to launch?

Every project relies so much on the execution, and this one is no exception. We decided to figure out whether or not it was viable for the general market once we had a prototype. We were both happy with the execution, and after seeing it work for the first time I don’t think there was any doubt we wanted to move forward full force.  When prototyping, Moshpic reached a certain point of development where it switched from being “that would be cool…” and became “this is SO cool!”. It’s that moment when the product becomes really exciting to work on because I can’t wait to have my family and friends put the finished app on their device. 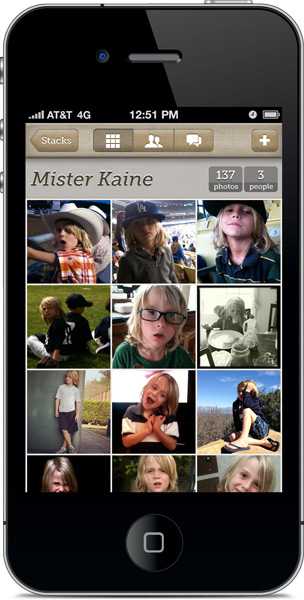 What previous business or practical experience do you have that you believe has informed what your achieving with Moshpic?

We both work on the web and with computers and tech. We read a lot about trends, the kinds of products being built, etc while trying to inform our own ideas of what to build. I happen to love the social internet / having a public personality (Facebook, Twitter, Instagram) while Ozenne is very private when it comes to that stuff. I thought it was interesting that both of us immediately wanted this product to be something because we both could see a personal benefit from being able to use it.

And what has been the most difficult aspect of being an entrepreneur with Moshpic?

The most difficult aspect is probably deciding what to include in the ‘MVP’, and more importantly, what to force yourself to not include. Then, not getting discouraged when similar products announce or launch.

Do feel that being based in Los Angeles has had a particular influence on Moshpic?

We lose the benefits of the resources of being in Silicon Valley of course, but at the same time, I think it helps not being in that bubble. This is also home for both of us so we’re comfortable here and have a lot of resources. It would take a lot for me to trade that in.

What’s your particular business vision or philosophy that you apply to running Moshpic?

We try to be decisive with our trajectory, build fast, and iterate. It’s funny, our locational limitations (I live on the East side [Silver Lake] and Ozenne lives by the beach [Hermosa]) helped shape my current philosophy which is: You don’t need your team in the same place or hold the same hours to be incredibly productive. If you work with responsible people, the job will get done, and the team will be more comfortable and happy with the freedom they have.

There are certainly plenty of tools out there to help create, build, document, and control almost every aspect of a project. If and when the team started to grow, I think I would try and do my best to keep this philosophy in place, but I do admit that it would probably become a little harder. 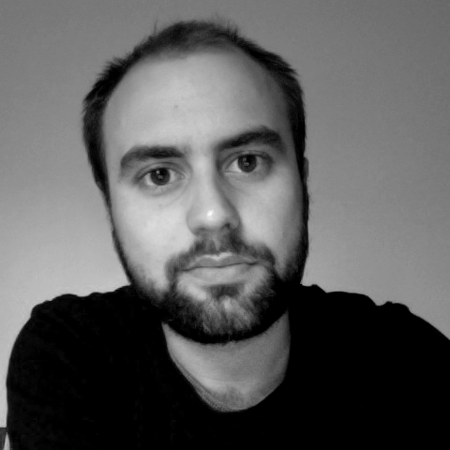 Chris Macho: I check my email in bed when I wake up. It helps me not fall back asleep. I then make coffee, walk my dog, read the paper. By 10:30 I’m in my office and I work my first block which is till about 5 or 6. I eat lunch at my desk.  I then go to the gym (every other day pretty much.) I try to relax, cook dinner, and watch baseball before I get an itch to get back on the computer for an evening block (8 or 9 to 12 or 1). But even in those between times, I’m pretty much always reading something on my phone, checking some metrics, answering some support emails. It’s not healthy.

Chris Ozenne: I wake up and immediately get to work for a few hours. Around noon I usually head down to the beach for a bit and have some lunch. Around 2 or 3 I get back to work again for another few hours. By 6 or 7 PM I head to the gym and have some dinner. After dinner I’ll usually get back to work again for a few hours. Chris Macho and I usually communicate over iMessage, so our conversations can easily continue from wherever we are at throughout the day.

And what’s the most important feature of Moshpic that you feel separates you from the competition?

It’s a private tool. We’re not obsessed with eventually making it social and letting your privacy unravel.

When you join our service, there are no photos for you to go browse. In order to start sharing, you have to link up with someone else to use the tool how it was intended.

The ability to intimately share photos as a collaborative stack, not just “follow” what other people share, but to actually contribute to the stack and the conversation taking place around it.

How do you approach business?

I try to use data and research as much as I possibly can, and I try to use common sense anywhere else. 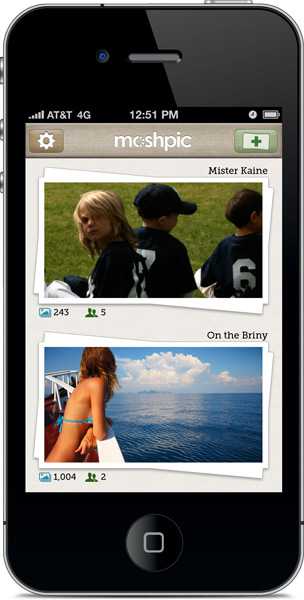 How is Moshpic currently funded?

Privately. (It’s almost 100% me, but I should give a little credit here to a few family members).

I noticed your jobs page advertising community manager positions. Can you tell me more about this and how it relates to your vision for Moshpic?

Right now I think the most difficult thing about launching Moshpic is educating users on how it’s different, and then encouraging people to sign up. We would love someone to help assist and grow our community of users.

So, what’s the best thing about being based in Los Angeles?

For me, it’s that I get to stay around my roots, my friends and family. I get to continue cultivating those friendships which have spawned a lot of opportunity.

What’s the worst advice someone could give a startup?

I once heard somebody say to someone else, “It doesn’t matter if you don’t know what you’re doing. Just start building.” This struck me as bad advice. Maybe he meant “start doing as opposed to not doing something or being complacent” but still… You should know what you’re doing before you start actually building.

Research is so important; knowing products, knowing trends, etc. You can end up wasting a lot of time and money and effort if you just dive right in. I know from experience. 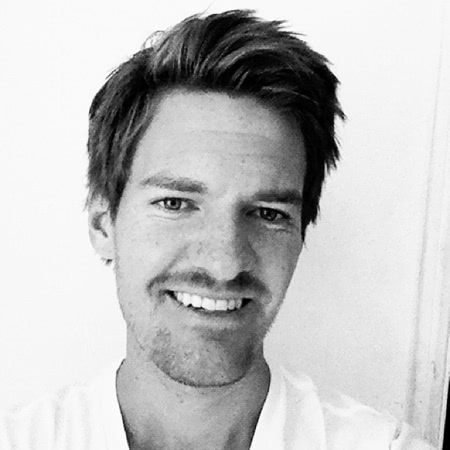 Chris Macho: on all the time no matter what.

Chris Ozenne: As a musician, it’s something that allows me to express myself creatively.

The best sushi in Los Angeles is :

Chris Ozenne: I don’t eat raw fish, I stick to my California Roll and I’m pretty happy with that.

Where would go to hang out and live for one month without having to concentrate on Moshpic?

We’re developing a desktop companion for Moshpic that is killer. Of course, we also would like to get on Android as soon as we can, but we might have to close a small round of financing before we can pursue that.

How can our readers get in touch with you?

Email either one of us at hello@moshpic.com. We read everything.