Can You Really Make Money Doing What You Love? 5 Lessons

Recently, author Daniel DiPiazza wrote “An Open Letter to Frustrated 20 Somethings” on Under30CEO.com. It blew up. Daniel’s premise: If it were up to him, why would he make a “job” or “work” the center of his life? When someone asks him “what he does,” why should he have to respond and narrowly define himself by the skills he uses to make money? 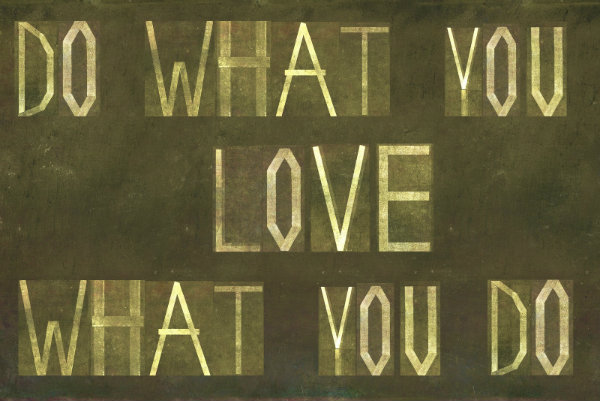 Touché Daniel, and I agree: there is a better way. Now let me break it down for those on a quest to “do what you love” from someone who’s been through all the ups and downs already.

How We Did It

I graduated from Bryant University having built what the Collegiate Entrepreneurs’ Organization named the best chapter in the world, four out of five years. I was leading a team of 150 smart, young, innovative, passionate people. No way I was getting a “real” job after that.

So upon graduation, I pass up job offers galore to “start my empire” from my mom’s basement outside of Poughkeepsie. Pitching VCs, writing business plans, sending money to India for web development – and still without a clue about how to actually make money from my lawnchair. I call Jared O’Toole to drink some beers on the front porch and we realize there have to be lots of other young people trying to start businesses just like us. We co-found Under30CEO.com.

With no revenue in sight, it’s now the dead of winter, and Poughkeepsie is getting depressing. Then the global financial crisis hits, and we’re really screwed. My mom comes to me shortly after Christmas to tell me that we will be losing our house. The home I grew up in.

Lesson 1: At least be able to tell your mom how your business plans to make money.

Suddenly, I question those $65k+ salaries I turned down. But it’s time to hustle. I accept the first job I can find on Craigslist, a position for a driver, and show up at 6 a.m. Wheeling and dealing can’t be so bad, I think to myself. It’ll be my mobile office…

Wrong. I show up and am given the keys to a dump truck. With an 18-foot trailer. I guess it’s time to learn to drive a dump truck.

I get us to the job site, where I’m quickly informed that the crew of laborers I’m driving around aren’t going to appreciate it if I sit in the truck. Time to dig ditches 12 hours a day for the next six months.

Lesson 2: When you put your back against the wall, you make things happen.

Sure, I could have let go my entrepreneurial dreams and gotten a cushy desk job. But instead, I put myself in the most uncomfortable situation possible. Digging ditches with guys who could work me under the table, and then going home to moonlight Under30CEO until 2 a.m., was absolutely miserable. I was making $15/hour, living in a tiny apartment with my mom. I love you, Mom, but that’s not exactly what I thought my “empire” would entail.

But these early days are what make or break most entrepreneurs. If you can get through this part and still believe in what you’re doing, you can survive.

We try everything we can think of on Under30CEO.com. We don’t talk about it much today, but Under30CEO was once a Ustream show, then a Ning Network, a Meetup, and a membership site; we’ve offered daily deals, affiliate offers, consulted startups, hosted workshops on social media, done dealflow for VCs – you name it, we’ve tested it.

It’s the smartest thing we’ve ever done. Make little tests, and if they make money, run with them. If not, see ya later!

While throwing stuff against the wall and seeing what sticks is great, when you’re bootstrapping on a ditch-digger’s wage, you don’t have the money or the patience to test things for very long. You’re trying to get cash-flow positive as fast as possible.  Any of the business models listed above are solid ideas and could be turned into million-dollar businesses. Looking back at it, it was probably our biggest curse too. We were looking to get hit the jackpot, and we were quick to give up. Young and impatient? Yes… But also smart. Here’s why:

Lesson 5: Never do anything you are going to hate.

Call me a pretentious, formerly-frustrated 20-something, but we always stuck to our core value of doing something we loved. We loved being in the business of inspiring young entrepreneurs. Many of those other business models were not that, and we knew we would eventually grow to hate them. We listened to our gut, and as corny as it sounds, we followed our dream.

But don’t think for a moment that it was easy.

Guts, grit, determination, yeah, all of that, and then some. Following your dream is much harder than anyone will ever tell you. But is it worth it? Absolutely.

Now we’re officially spinning off a new company, based on something we’re even more insanely passionate and excited about: A travel company for ambitious young professionals. The best part? I got to spend seven months around the world, working from this very laptop, plotting world domination.

No wait, ACTUALLY, the best part is that this travel company is designed to be the launching pad for young people who want to see the world, and go out and do big things. This isn’t a course and there is no curriculum. We simply curate experiences in places like Costa Rica and Nicaragua with other amazing people and inspire the creative environment to let you guys figure out your next big moves.

To return to the “open letter” that inspired this post, yes Daniel, you’re spot on. It is possible to make money doing what you love. It’s just not easy. But when it helps other people figure out their dreams? Then it’s game on.