Some people are born with an innate ability to take in and retain massive amounts of auditory information. Those of us that don’t fall into the Rain Man category are forced to rely on post-its, awkwardly small notebooks, and the back of our hands to keep track of important information that gets blurted out at us throughout the workday. 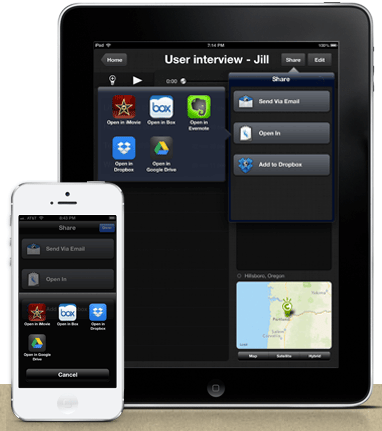 My workday involves a lot of meetings and interviews. While I totally dig the fact that I get the chance to talk to the founders of new and interesting startups, I never quite got the hang of taking notes while keeping a nice organic conversation going. I think that this is a common issue for a lot of people, and could very well be why therapists have their patients lie down on a couch in front of them. It’s hard to watch someone take notes if your facing a celling – just saying.

Not to go all Proactive commercial on you, but I was really getting annoyed with this whole process when a friend and colleague recommended an app called Highlight by Cohdoo. I had thought of using a recording app for a while for a while but hadn’t been wowed by any that I had seen. I took Highlight for a test drive and was pretty impressed right off of the bat – mostly because it allowed me to mark or highlight key moments in the audio really easily.

The app puts a big green button at the top end of the screen while recording. All a user has to do is tap the button when they hear something important and the app will place a marker on the recording’s timeline. This is awesome because you can easily review key points of a meeting or interview, but also you don’t even have to look away from the person you’re speaking with to book mark an “aha moment.”

On top of letting users keep track of key points while maintaining a good flow in conversation – Cohdoo Highlight app has really useful play back system. You can skip to highlighted parts of the audio, listen from the beginning, and if you want to check what someone said there is an easy “back” button that plays audio from 10 seconds earlier. You can also slow down or speed up the audio to fit your needs.

Recording is just the half of it.

It’s really easy to bookmark and add notes to the recording. You can send the audio file with or without your notes to other people via dropbox or email right from your iPhone. The file can be played back on iTunes, (and Quicktime for PC’s) but Cohdoo has a free Highlight Player so people on your team can get all the visuals you added with ease.

The only limitation to this particular life hack is that it happens to be a little iOS centric. Recordings are super easy to share, which is great for when someone misses a meeting or a lecture, but an iPhone is required for the actual recording part. Cohdoo also provides a free converter app so that the recordings can be shared across multiple platforms super easily.

It might seem too straightforward to be a life hack, but being able to take note of important moments in the conversation without having to whip out a pen or break my train of thought to scribble down what is being said has been a game changer. The app is now free (which is adorable because I paid like $2 for it a few months ago) so swipe it up before it gets bought out by a bigger app that you have to pay for.