Any Bootstrapped Startup Can Beat MarketMeSuite ($1.3M In Funding) In Twitter

It’s 2013 people. Twitter’s been around for more than 5 years now. You can’t afford to make rookie mistakes. And this, this is spam people. Social media spam. And you, a 20-year-old running a bootstrapped startup, you know better than these guys. 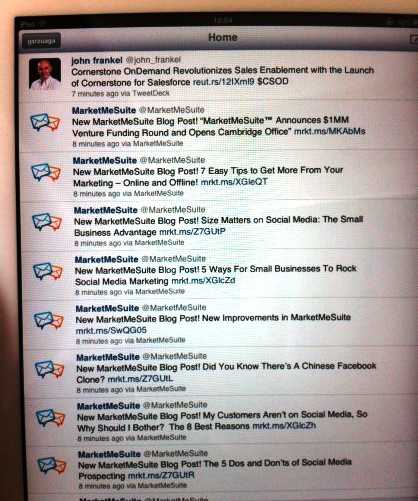 You’re wondering what does MarketMeSuite does? Well, funny enough, in Crunchbase you can read, “MarketMeSuite has taken a unique approach to Marketing on Social Media.” Really? Want to know more? “They are a fast growing company with over 30,000 users.” And, wait for this, they’ve raised $1.3 Million in 2 financing rounds.

MarketMeSuite’s 21k Twitter followers don’t deserve being treated like that! You can say your social media guy is new, and that this was a rookie mistake, yada, yada, yada. Right. Like we have to care.

It’s 2013, people! Time to up your Twitter game. If you’re a young internet entrepreneur, struggling, hustling, being frugal, fighting for your chance, after seeing mistakes like this I can only tell you: keep going, you still have a good chance!

The CEO of MarketMeSuite contacted us after publication of this article with her apologies:

Gonzo is a passionate internet entrepreneur doing business online since 1996. He has lived in 5 countries, speaks 5 languages, and published 5 books. His goal is to be a motivational speaker. He loves quotes, writing, and reading. Follow him on his personal account on Twitter @garzuaga. If you love motivational quotes, follow his separate Twitter account @GonzoQuotes. Gonzo Arzuaga