Why Hipster Habits May Just Be A Novelty Act

Buster Benson of Habit Labs is releasing a new app and it’s called Hipster Habits. Like Habit Labs’ other products—Health Month, an interactive game encouraging people to meet their personal goals, and bud.ge, an app that cutely harasses you into working out—Hipster Habits wants to help you make yourself into a better person.

Hipster Habits is taking a different approach than Health Month or bud.ge, though, in that it’s not exactly an app. While the website encourages users to use share the experience with their friends, the main body of the product is a little book that you can print off of their website and then carry around in your pocket for a month. 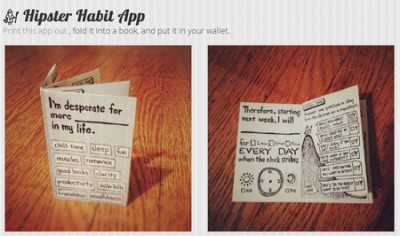 Complete with cutesy little drawings, a non-tech focus and DIY feel, this “app” definitely got the style of it’s target audience right, but can a non tech product focusing on a group that’s known for embracing its bad habits really be successful?

I don’t know about you, but I have to admit: I have some pretty bad habits. I don’t exercise enough (truth: at all), I eat too much white flour, and I spend way, way too much time in front of my computer.

Realistically, everyone has bad habits, so this requirement isn’t too hard to meet. Find me someone without bad habits and I’ll check for the computer chip in the back of their head because more than likely they’re secretly a robot. 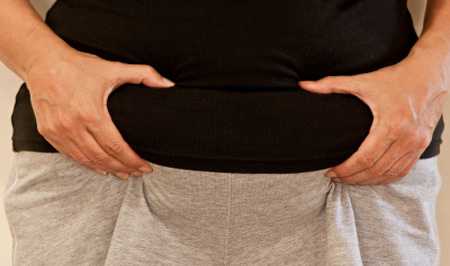 Am I a hipster? Probably. I lived in a gentrifying part of Brooklyn for a couple of years after graduating from an expensive liberal arts college in upstate New York, I make dresses out of recycled fabric, and almost everything I own is vintage or vintage style except, of course, my MacBook Air.

But, oh, the complicated relationship we have the word “hipster.” No hipster ever wants to admit that they’re a hipster, unless they’re trying to be especially cool by “re-appropriating” the word or whatever, which is obviously a super hip thing to do.

This is the first major problem I see with this product: the name incorporates a word that no one wants to associate with. If you’re trying to pull people to your product, it’s probably not a good idea to focus on a moniker that a lot of people consider to be negative.

Personally I really dig the idea of having an actual, physical thing that I can hold in my hand and write on with a pen, but I see two major problems with this model.

One is that, no matter how much “hipsters” like art and DIY stuff, everyone has a smartphone and everyone is still connected all the time. Realistically, who’s going to remember to look in their wallet for that funny little book they printed three weeks ago?

I got yelled at all through high school because I wrote my homework down on my hand instead of in my planner, but I did that for a reason: I just didn’t look at my planner. Ever. I don’t think that was an uncommon problem in the days before smartphones and I have to believe that with more and more of our lives existing online, it’s only a bigger problem now. 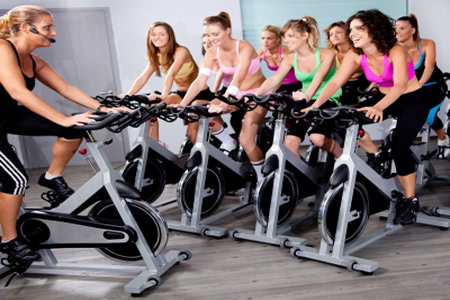 The second problem is that breaking habits and forming new ones really requires community and someone else reminding you to do what you need to do. That’s why personal trainers were invented.

Habit Lab’s other product, bud.ge, taps into hipster style while still keeping the tech element engaged, making sure that you’re paying attention with daily reminders to get your ass in gear. Bud.ge also allows connects you directly to social media, encouraging and competing with other people who are trying to meet similar goals. Hipster Habit has no built in social media feature, making it a much more solitary experience.

So far over 10,000 people have downloaded and printed Hipster Habit since it was launched last month, so maybe they’ll prove me wrong and totally blow up but it seems to me to have gotten the first couple of steps right and really messed up on the last ones.

Anyone in the startup world knows that two formulas for success are easy, constant interaction and utilizing social media so your users can spread the word. Hipster Habits just doesn’t do either of those things. 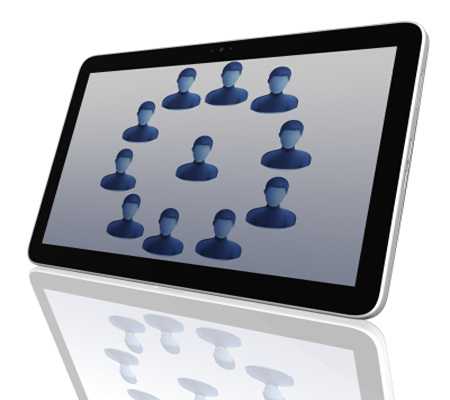 My prediction? This product isn’t going to make it past the novelty stage.