Now you can run your startup business from anywhere in the world with just a smart phone. Voiceably creates a virtual business phone system tailored to your specific needs. And right now, they’re gonna let you try it for free.

While sometimes it can seem like most of the world has moved away from actual phone calls to texts and emails, the one area where you still need to actually talk is in business. The problem for independent workers and some startups, however, is the fact that a designated landline doesn’t provide the mobility they need, even though it conveys the professionalism necessary to move forward.

They should check out Voiceably.

Voiceably is a simple business phone system that turns a mobile phone into a professional phone line. Unlike a traditional business line, Voiceably doesn’t require any expensive hardware from the phone company. Instead, you can get your own unique phone numbers, including toll-free, local, and vanity numbers.

Once you’ve got the number set up, record a quick greeting to let callers know they’ve come to the right place. While I think I’d probably put in the theme song from Fresh Prince of Bel-Air, you should probably just pick the person in your company with the nicest voice to record it for you. 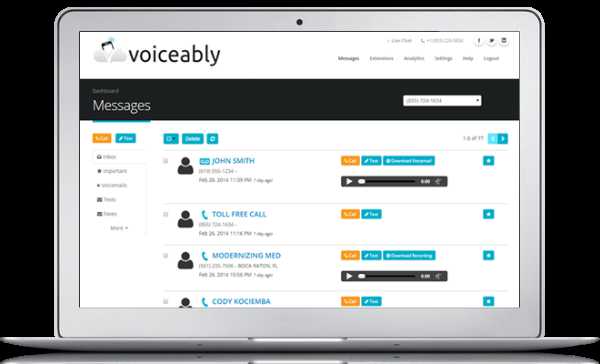 Voiceably is great for single-person companies but it’s also excellent for companies with multiple team members. Just like in an old-school office, each person gets their own extension, allowing them to receive and make professional phone calls from their own cell phones.

Does anyone ever listen to voicemails anymore? Personally, I kind of hate them, if only because they’re usually built on systems that require me to press 546 different buttons before finally getting to the awkward, drawn out message that someone decided to leave.

With Voiceably, voicemails (and faxes!) are transcribed into emails, which means you can access and respond to them within the flow of your normal day. No more taking time away to push buttons and listen in.

I saved the best feature for last, because really, the greatest thing about Voiceably is the fact that it allows you and your office to be mobile. As the world becomes more and more internet-based, a system that allow mobility for you and your entire team is priceless.

Are you ready for an amazing virtual phone system?

I know you already know that being tethered to one spot is so last century, so why not jump onto a whole new way of doing business calls? Voiceably is here to help with a 30-day free trial.