Commuting A Drag? Enliven The Ride With TransitChatter

I don’t hold anything against all the people on their way to work listening to music through their headphones, content in their private worlds. I’ve been there many times myself, happy to tune out and enjoy a last few minutes undisturbed. Still, I’ve often thought that it’s a little sad that everyone is traveling together but not interacting at all, which is why I was excited to hear about TransitChatter.

TransitChatter is a mobile application that connects commuters, allowing them to chat with each other, receive announcements regarding their route, and to find both information and special offers related to their destinations. (At the moment the app is Chicago oriented, but after KillerStartups coverage… the reach of this commuter app will undoubtedly expand to a city near you).

I’m a little tired of marketers using technology to invade every moment of my waking day and pitch me deals with pin-point accuracy, but there’s a lot to be said for finding out about a happy hour special on the way home – directly in my path – after a long day. Advertisers will no doubt love the prospect of using geo-spatial information to reach customers with location specific deals. And after that second G & T, I’ll probably be happy to know about ongoing local events or an appetizing dinner discount. 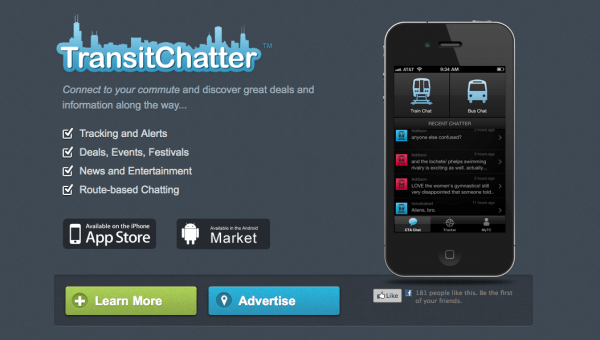 How Long Behind Schedule

As every commuter knows, time is everything. Which subway line just stopped? When’s the next train due? How much longer will the alternate bus route take while construction is underway? Up to the second details about transportation are vital, and TransitChatter commuter app provides important service announcements and alerts. Accurate information regarding public transportation helps people plan their days as well as relieves the stress of wondering what the hell happened to the ride you were counting on.

Not that any of us trust official announcements. Half the time you can’t make them out clearly to begin with, which is why TransitChatter putting you in touch with your fellow commuters is so cool. You can fill each other in about what’s going on, and give each other the real scoop. That minor delay for bus maintenance may be an engine fire that means your ride isn’t coming anytime soon. And now you’ll know the truth.

OK, for the less cynical, TransitChatter has the social potential to share games, group chats, and arrange for other activities. Why should the daily ride be a dull trudge or a lonely, tedious experience? Having spent a good deal of my last three years using NYC and Buenos Aires transportation, I’ve seen a lot and missed so much more. The possibilities are endless really. 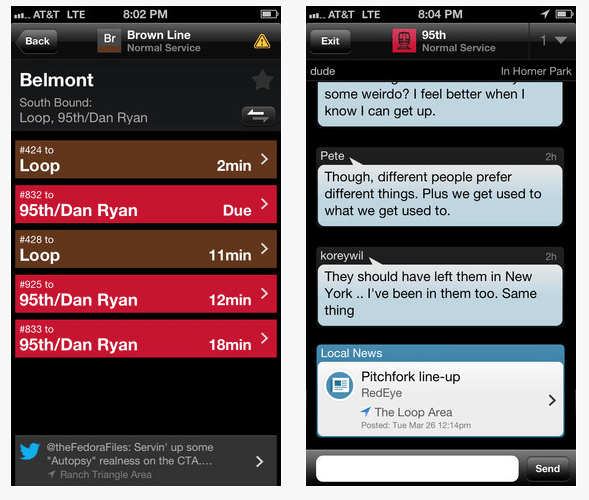 You might have a good friend waiting on the same subway platform, and now you’ll have a way to connect and travel together. That busker with the bum amp who thinks he’s Stevie Ray Vaughn, yeah, someone might be able to warn you about entering that car and prevent your nerves from fraying any further.

Chicagoans Samuel Pro and David Rogers built TransitChatter after spending too much miserable time on the L. Give their app a shot and connect to your commute in the App Store or Android Market. And feel free to buy me a round after you’ve saved yourself hours of frustration in places far more pleasant than in the station waiting on phantom F trains.