Townhang: Because Making Friends Ain’t What It Used To Be

KillerStartups > Startup Spotlight > Townhang: Because Making Friends Ain’t What It Used To Be

You did it! Small benchmarks of maturity are starting to punctuate your daily life now. Your apartment for example, is starting to look less like a dorm. Or maybe it’s the fact that you are starting to eye travel mugs the way you used to look at novelty beer koozies. Who’s your favorite NPR presenter? You don’t have to answer that, and don’t worry, I think Morning Edition is the sh*t too. I mean come on, if you miss Morning Edition you are only going to get half of Jon Stewart’s jokes that night on The Daily Show.

Wanting to be an undergrad again is not a constant battle for most of us. Fine, their livers function at superhuman levels, and their energy reserves are those of a body-builder with a meth-habit, but hey – we have farmer’s markets and trivia nights. My work pays for like 60% of my subway pass, and me and my peeps…

Ok, so that’s actually the not-so-awesome part of being a young professional – the whole making friends thing.  House parties and beer pong are behind us, but we’re not dead (or buying timeshares in Florida) yet. So how does one go about branching out socially?

Is It Lame To Want A Dating Site For Making Friends?

It’s a question that makes you feel lame even thinking about, but now that your college buddies have scattered and your life seems to be moving in a more predicable rhythm, how can you make new friends who like to do the same things you do? This was exactly the thought Alexey Karpov had back in 2011, when he was traveling to Seattle for business and ended up with a few extra days to hangout and explore the city. He had done all of the touristy things on a previous trip there, and realized that existing social networks and travel sites weren’t really all that helpful. 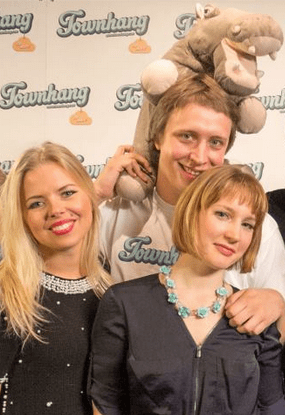 Karpov realized on this trip that there was no easy way of finding things to do with new people, even though he was a normal nice guy with a range of interests. I guess they don’t make Match.com for people looking for friends. That July while at a barbecue in Alexey’s backyard, he decided to do something about this void in the market. 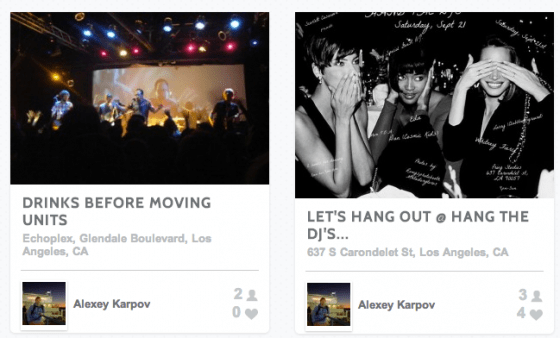 Karpov put together eventually grew to a group of 15 programmers, designers, researchers, and other professional badasses, who all got to work developing what would become Townhang.com. It’s now really active in Los Angeles, but is poised for world domination at any moment.

Townhang ended up being a streamlined and attractive online resource for users looking to meet new people, try new things, or just get the out of their apartments. It’s built on the idea that people would do more if they could find like-minded folks to do things with. The site is clean and simple – activities are the main attraction here. Snapshots and bullet-pointed information are presented in a way that makes their viewers realize just how much is going on right outside their doors.

What sets Townhang.com apart (from say Facebook) is that users can search events by key words and categories. Events (or “Townhangs” as users now call them) are also open to the public so it’s easier to get the word out that something is going on. 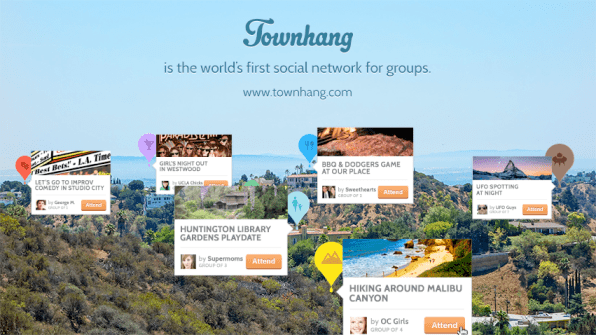 Signing up is pretty standard – enter your email address or Facebook info and you’re done. Joining events is a simple click away, and creating an event is notably easier than doing the same on the FB. There is even a messenger that can be used between users. When you sign onto the site you see the newest events on the top of a feed, but you can easily refine your search to specific categories or key words. The categories are as to-the-point as the rest of the site:

In addition to its simplicity, Townhang’s appeal comes from its ability to attract people with a certain passion for life and allows them to connect and foster that gusto. There is no law that says our lives need to get more boring as they get busier. Sites like Townhang.com enable us to get the most out of our increasingly limited free time, and get together with people who share an appreciation for the fun and random things in life.