Marketing is getting more and more personalized. For most people this notion is both exciting and scary. Tech blogs and news sites have been abuzz with reports that Facebook, Instagram, and Twitter are using our data, specifically our photos, as part of the marketing services they offer (and make bank off of). The ethics of this photo hijacking is definitely worth discussing, but in the meantime some startups are taking a much more straightforward approach to getting people involved with branding and marketing efforts.

The Daily Hundred is the brain child of college buddies Nicholas Haase and Maxwell Finn, who met while studying at Emory University. The pair founded the startup back in 2012, on the premise that people should be rewarded for the part the are already playing in marketing schemes by posting photos of the brands and products they like.

The Daily Hundred is a new marketing platform that is revolutionizing the way brands get to reach potential customers. Word of mouth marketing is probably the oldest marketing strategy still in practice, and for good reason. We may want to be like a celebrity, but when it comes down to it we trust our friends’ opinions more. Social media companies are well aware of this, and have invested major money in selling marketing products built on the fact people share things they like online with their friends, and that this translates into actual sales.

Now it’s still a little unclear exactly where big brother Facebook is going with this whole, “using our data and identities for ad purposes” thing, but The Daily Hundred approaches marketing in a far less shady way by putting users on even footing with the companies looking for marketing support.

This new platform turns photo taking and sharing into a contest, where users snap a photo of something related to a product or brand being featured that day and submit it. Once submitted, photos receive votes from other users, and the two pictures with the most votes get 100 bucks each. Discounts and other bonuses are handed out as runner-up prizes.

Revolution = Power to the People

The revolutionary part of this is that the companies sponsoring this contest benefit from this deal too. The app, which is available for both iPhone and Android, empowers businesses to initiate fun, guerilla marketing style ad-campaigns in real time, and in the locations they specify.

Nicholas Haase summed up this potential for symbiotic relationships between companies and customers recently by saying,  “We believe a brand’s community is the best advocate for a business and that the power of word-of-mouth advertising can be activated through incentive-based rewards.” 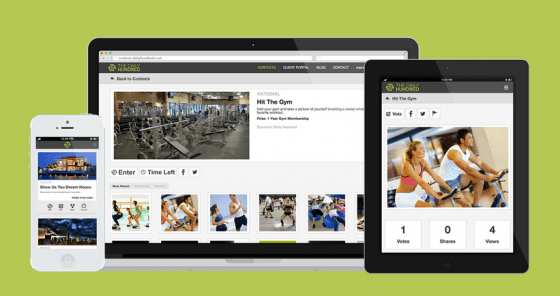 This kind of insight has paid off. When the app was still in beta testing it nailed some seriously impressive statistics. It was developed in Gainesville, Florida and within three months of launching was on 35% of the iPhones in the city. On top of that, the company was being checked out 5 times more than the average app in the practically impenetrable  “lifestyle” app category.

The app continued to build momentum and with the help of investor Francis Wisniewski, scored $500k in Series A funding. The Daily Hundred is available on iTunes and in the Google Play Store, and is poised to expand beyond its current locations in Florida. In fact they’ve even turned this into a contest – their site says that they will soon be taking votes on which city to include in their shenanigans next. Talk about power to the people!