Got 6 Seconds To Spare? Check Out The Best Vines

KillerStartups > Startup Spotlight > Got 6 Seconds To Spare? Check Out The Best Vines

Vine was released almost exactly a year ago, introducing the world to the beauty and ridiculousness of the six-second video. It was an overnight success, climbing the Billboard Top 100 of apps – the iOs App Store – until they reached number one on April 9, 2013. Later that year they added an Android app, extending their reach to millions of users.

Since that time, Twitter-owned Vine has continued to dominate in the video-sharing field, surviving even attacks like Facebook-owned Instagram’s decision to launch their own video-sharing app.  While they haven’t yet come out as the complete and total kings of the moment, their fanbase is strong and they’ve managed to build a very clear culture around their product.

Real celebrities are on Vine but the site has created some mini-celebs in their own right, much like YouTube. Vine is especially known for funny videos, with compilations going viral practically as soon as they’re posted. For people who just can’t get enough funny Vine vids, there are sites like The Best Vines.

Having a bad day? These are great for a laugh.

The site is simple, with a tile UI that shows one after another popular video. You can browse the ones that show up on the homepage, click the random button for six seconds of whatever, or check out one of their compilations for “best of” videos.

Personally, the last category is my favorite because while I can definitely fritter away an hour or two of prime procrastination time by clicking on random Vines (and there are definitely some gems that pop up), there’s really nothing like a curated full 11 minutes of funny snippets. 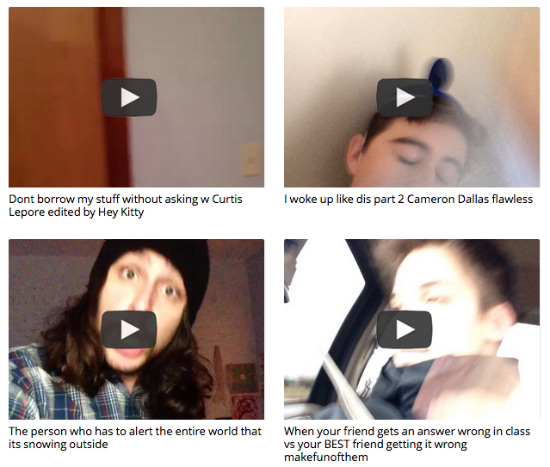 TheBestVines.tv has a Greatest Vines 2013 compilation as well as an Extreme Vines compilation, Best Vines Of All Times, and month-by-month compilations for 2013. Basically, they have a whole lot of vine compilations for you to check out, laugh at, and share around. It’s a fun way to spend your lunch hour or just a nice pick-me-up when you’re feeling blue.

As I said, the winner in the war for video sharing app domination has yet to be determined (and Instagram is absolutely a formidable contender), but Vine is definitely a strong contender. If you’re not too sure about that, head over to TheBestVines.tv and have a look around. If nothing else, you’ll be sure to laugh a lot and who can think of anything bad to say about that?