Never Suffer From A Dead Phone Again With SOScharger

Raise your hand if you’ve never, ever been caught with a dead phone when you really needed one. While I obviously can’t see you, readers, I’d say it’s a pretty fair bet that not one of you has a hand raised.

The dead phone problem has been around for awhile but since smartphones (with their big screens and app after app and internet browsing power) became popular, it’s practically an epidemic. Finding places to plug in your phone can be a pain or, in the case of real emergencies like a power outage, can even be impossible.

That’s when you should turn to the SOScharger.

SOScharger is a portable charger for your phone. You can charge it either through a USB port like the one on your phone or by generating power manually with the crank on the side. While it’s not the only portable charger on the market, SOScharger distinguishes itself from the competition in four main ways:

The SOScharger keeps the design simple but functional with its long handle and large grip that was developed after research into existing hand-crank products. The team behind the charger put simplicity first and foremost when they were designing and that definitely shows.

Simplicity is also a driving ethos behind the SOScharger user experience. They’ve listened to customers of their first, wildly successful crowd funding campaign and created a product that’s even better than the original prototype. They’re also committed to customer service through their online customer support, available every day. 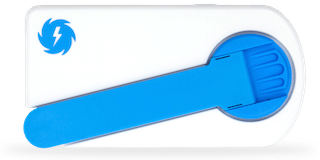 While some companies try to to do it all, the team at SOScharger is “laser-focused” on doing one thing very well: creating and distributing excellent portable power products. They believe that backup batteries are only going to become more and more important as our number of devices increases and they want to be the company providing them.

SOScharger is still in the very early stages of their company but they’ve already committed to donating a portion of their profits to non-profits once they’re able to sustain themselves. 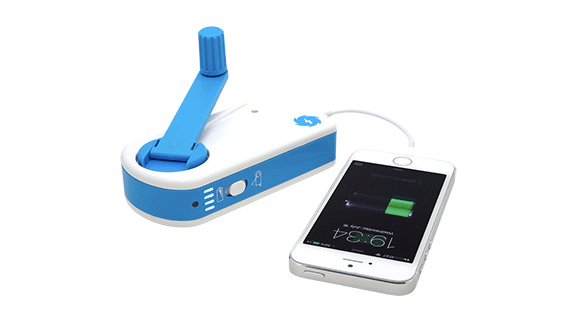 SOScharger is currently competing Fundable and the Staples Crowd2Shelf contest. The first round saw them going up against hundreds of companies for a chance to be named one of the 25 most innovative companies. Now they’re in round two and if they win they’ll get the opportunity to sell their product in Staples stores and online.

One of the factors in this round is the success of their crowdfunding campaign on Fundable. If you want to make sure you’re never caught with a dead phone again, head over and help push them to the top!