It seems like the world is abuzz with the potential ramifications the digital currency bitcoin is presenting to businesses and economies. It’s a hot topic, and the conversation over the merits and dangers of bitcoin has moved from nerdy basement gaming sessions into a full on congressional hearing. US officials seem to be changing their tune about this new currency. Previously, the general consensus was that bitcoin was the work of the devil and only had utility to lowlifes who want to launder money or sell drugs.

It makes sense that a bunch of guys in suits got a little freaked out by a form of currency that is characterized by its anonymity and its ability to decentralize financial transactions. The government seems to be opening itself up a bit to the idea. The Wall Street Journal has quoted Federal Reserve Chairman  Ben Bernanke as going on record saying developments in digital currencies like bitcoin, “may hold long-term promise, particularly if the innovations promote a faster, more secure, and more efficient payment system.”

Comments like this from government bigwigs has boosted the value of bitcoin dramatically over the past few days, with various sources reporting its total value as being over $8 billion (USD). Not bad for a 4-year-old currency that only exists in the matrix. So while politicians and committee members hash out what the legal framework for an economy that includes digital currency should look like, some savvy companies have decided to cash in and incorporate bitcoin as a central component in their business models. 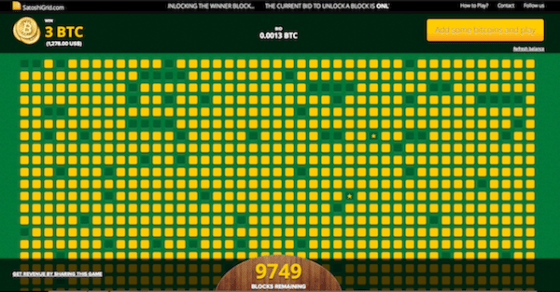 One of the latest examples of these digital pioneers is SatoshiGrid.com, an online gaming platform that offers players a chance at winning a huge prize (in bitcoins, duh). The layout is pretty straightforward, it’s a multiplayer game where users try to find a “prize POT” under one of the 1ok yellow bricks.

Getting in the game is simple, and feels kind of bad-ass because you have to deposit 0.0013 BTC to unlock or uncover each brick. For non-techies out there, this process lends itself to feeling like a member of Anonymous killing some time in between taking down government agencies. If you’re not as easily impressed by BTC as I am, then you might still find the gaming model to be kind of cool.

The POT grows after block number 1200 is unlocked. They do this in order to recover their initial investment but the exact growth depends on how many instant prizes (x2, x5 or x10 prize tokens) appear. The POT jumps in value all the way to 4.9 BTC at block 3000, 13.1 BTC with block 5000 and more than 30 BTC when in block 8000. Regardless of the exchange rate, that is some serious cash. Essentially, when there are less bricks or blocks left to unlock, the prize and probability of winning increases. The folks at SatoshiGrid are hoping that this is the kind of math people can get behind.

Fairness is guaranteed by using a one-way hashing algorithm, so you can rest assured your chances to cash in on some crazy digital money are the same as any other modern day gambler. For more on the rules and layout you can contact them at their website and get updates by following them on Twitter.