TOMS Shoes, a company which gives a pair of shoes to a child in need for every pair it sells, inspired Brent Freeman. He, too, wanted to run a business for profit that would not only have a positive balance sheet, but a positive impact on the world. When he realized that there were lots of businesses like Tom’s Shoes with cause-oriented brands, he had an idea for putting them together.

Capitalism With A Conscience

Roozt is a unique kind of shopping mall. It’s on online marketplace that brings socially conscious consumers and retailers together. Here, social good defines chic. Shop by brand name, global region of impact, or by browsing one of four categories: Humanitarian, Eco-friendly, Ethical, or Community. Roozt gives small and medium-sized, socially responsible companies a platform for their products. Customers have the chance to purchase products that reflect causes they themselves either champion or support. 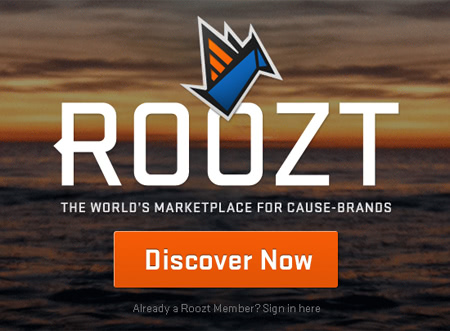 The ad for Sseko Designs reads, “By purchasing Sseko sandals you are enabling a bright, young Ugandan woman to continue on to university and become a future leader of Uganda.” Comfy footwear and the opportunity to further some one’s education? Sold.

It’s worth mentioning that I am an advertiser’s nightmare. I’ve honed a zen practice of ignoring ads entirely. As soon as commercials intrude on my television or radio program, I tune out. Print ads can’t slow down my eyes. But I read the ads on Roozt. The great stories behind these brands make excellent selling points.

The business model isn’t the only story here…

Freeman’s journey to founding Roozt has movie potential. He started an international commodities business in 2006 while he was a student at the University of Southern California. Poised for millionaire success, with offices in Los Angeles and Dubai, the economic crash of 2008 erased his efforts. “It was almost a blessing,” Freeman said of the false start, “as it gave me the opportunity to think about what I was truly passionate about.”

The road stayed rocky from there. Originally, Roozt launched in 2010 as an ecommerce startup. When Freeman wanted to change the site to its current look and shift the company to a new business model, $130 left in the bank account stood in the way of his plans. Confronting another failure, Freeman found $1 million in angel investments. But this didn’t lead to the happy ending you might expect.

Freeman feared that the investors didn’t share his larger vision for the company. He believed they would push changes in order to increase profits, which would compromise his core values and the integrity of Roozt brands. He took a pass.

Instead of accepting the million dollar lifeline, Freeman set out to find “mission-aligned investors,” angels who would not try to change the business model of the company. A fortuitous meeting with early Netscape and Google employee Steve Schimmel resulted in a $250,000 investment. It looks as though honoring vision over immediate financial reward has paid off. Roozt has since grown to a user-base of 70,000 members. Over 100 brands are listed on the site with many more hoping to be vetted.

“Within the next five years, social entrepreneurship will be the new standard,” Freeman prognosticates.

Naysayers might call Freeman’s business model green-washing or cause-washing, or just another way to bring in customers. Trying to engage the investment community to fund ventures seeking to make a difference or having a donation component can prove challenging to social entrepreneur as well. Freeman remains convinced though that socially responsible business is an unstoppable trend, fueled by increasing customer demand. He volunteers his time in East Los Angeles high schools, teaching aspiring entrepreneurs about cause-oriented businesses.

And If Ethics Isn’t Your Cup Of Tea

I’ve always loved maps and globes. To the delight of the child in me, Roozt has a very cool interactive map that let’s you follow the positive impacts Roozt brands are making everywhere.

Roozt.com – bringing sexy back to giving back.