See People’s Reactions To Your Selfies With Reactr

Taking, sending, and viewing photos are without question the most popular things we do online today. While the big names like Instagram and Snapchat seem to own the photo sharing space, that doesn’t mean that smaller app designers and companies can’t get in on the action too.

So what gaps can be filled?

One thing that’s currently missing from the photo sharing experience is your audience’s reaction. Sure, you can count up all of your likes and reshares to see if what you’re posting is popular, but what about people’s actual reactions in the moment? Are they laughing, crying, scoffing, smiling? What kind of photos get the best reactions?

If you want to know exactly what people think of the pics you send them, check out a new app called Reactr. It’s a simple app that adds a new layer to the photo sharing experience, making it a two-way street instead of a one-way interaction. 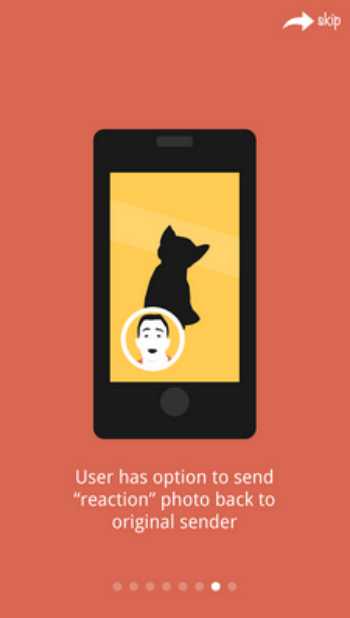 Download the app for either iOS or Android, take a photo, add a caption, and send it to a friend. The app will capture your friend’s reaction to the photo and send the picture back to you, giving you insight into the exact reaction your pic is evoking.

The team behind Reactr is Eyepinch, Inc., a full-service ad agency that offers both “online and offline experiences.” Headed by Ash Gilpin, Eyepinch has developed other apps, including one called We Heart Movies. Gilpin started Eyepinch in 1996 when he was only 16, but he’d been working online since the age of 14 out of his parent’s garage. Basically, he’s got that classic tech boy-genius cred on his side.

Today, Eyepinch has developed into a professional ad agency that has long since outgrown their humble beginnings. While they’re physically located in Virginia, their focus has always been worldwide as they’ve reached their customers through the internet. Their work covers a variety of projects, from web design, web hosting, programming, mobile app development, video production, social media marketing, graphic design, print advertisements, and internet marketing services.

Current and past clients included everyone from dentists to lawyers to a firearms safety training course to the Virginia Symphony Orchestra. Basically, these guys can work with a huge range of clients and clearly serve their needs.

Whether you’re looking for a full branding experience or you’re just interested in having a little fun with a new photo app, go check out Eyepinch and Reactr.