Nempler Makes Keeping It Local As Easy As Pie

I just got back from the farm stand down the street, where I picked out fresh veggies and left my money in the lockbox. There’s no one working at the stand and all of the food is picked that day, no more than half a mile from where I bought it. 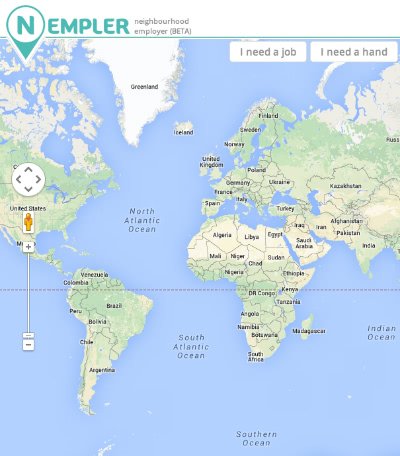 It’s the ultimate in local consumption.

While a trust-based farm stand is definitely a uniquely Vermont kind of thing, people all over the US are starting to realize the value of keeping it local. From local food movements to craft beers to buying clothing made in your town, staying local is now considered by many people the only way to go.

But it’s not just about hipster cred. When you spend buy local goods and services instead of dropping money on things made overseas, you help boost the economy in the community you live in. You have more control over the conditions your goods are made in and you improve the lives of your neighbors.

With the economy still in the dumps, that last part is especially important. So many people are under and unemployed and more and more folks are turning to taking in odd jobs to make ends meet.

And that’s where Nempler comes in.

Combining the words “neighbor” and “employer,” Nempler connects people who need jobs done with their neighbors who are interested in doing them. Currently in beta, the site is in its early stages still but has the noble mission of helping unemployed people earn some money by finding jobs within their own communities.

The site also works as its own mini social network. You’ll upload a photo of yourself and then ask your friends to “like” your profile. This lets the site know that you’re a flesh and blood human being instead of a bot spamming the site.

When you’re looking for a certain service, all you have to do is create an ad and the site will automatically pull up people in your area who are qualified to help you out. On the other end of things, you can search for people who are looking for your particular brand of expertise.

So if you’re already on the eating local, craft-beer favoring bandwagon, consider using a site like Nempler next time you have a job – odd or not – that you need taken care of. You’ll get the job done, get to know a neighbor, and have that nice fuzzy feeling of knowing you’ve helped someone out.