If You Want To Lower Your Bounce Rate, You Gotta Get Sticky

KillerStartups > Startup Spotlight > If You Want To Lower Your Bounce Rate, You Gotta Get Sticky

Oh, the dreaded bounce rate. That little number in Google Analytics that has elicited dread at one point or another in every online company out there. Everyone knows that keeping visitors on their site for longer is essential for the success of a company but the thing that most of us don’t know? How to do it. 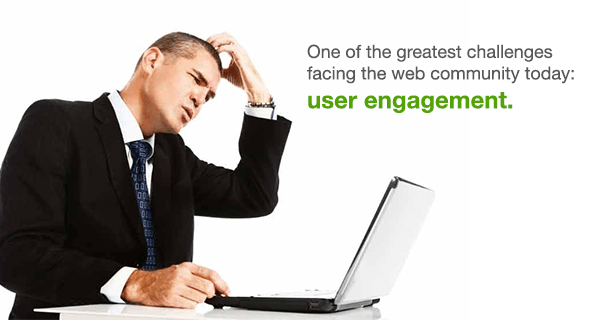 How do you keep people from wandering away from your site in this age of extreme ADHD? How do you make sure that the Buzzfeeds and Upworthys and adorable kitty cats don’t prove to be so much of a siren call that your potential customers just can’t resist?

You have to get a little sticky.

One way to keep users on your site is to transform your content from static to interactive – looking pretty just isn’t enough these days. Not sure how to do that all on your own? Then you need QuizRevolution.

QuizRevolution is a comprehensive toolbox app platform for quickly building and deploying compelling, interactive multi-media online experiences which deliver more than 10 minutes of sticky user engagement – an impressive number considering the fact that most sites have an average of 30 seconds of user engagement. They provide the quiz templates, you provide the content, and you’re all set to watch that bounce rate drop right off of Google Analytics.

While QuizRevolution is still only in beta, they’re already showing some impressive metrics. Their initial test was a Facebook trial app called The Logo Quiz that was played over a million times. From there, they’ve gotten even more impressive with over 100 million served while still in beta, hundreds of thousands of daily page views, hundreds of thousands of global webpages with QuizRevolution embedded technology, and a tested lead-generation conversion rate of as much as 7.2%.

Viral Quizzes and Surveys from QuizRevolution on Vimeo.

They’ve also already figured out how to make money off of the whole shebang, which is something that can’t be said for a great many startups. QuizRevolution has a price scale ranging from $5 per month to $599 a month, depending on the individual needs of each company. They’ve also got a 70/30 revenue share agreement with Wix.com, which is in the process of rolling out QuizRevolution technology to over 50 million websites. They’re currently working on a similar deal with SalesForce and 12-15 other similar resellers.

The QuizRevolution team is led by CEO Rich Brownstein, who took his first company – The Transcription Company – from zero to exit in twelve years. CTO David Goldberger has been doing systems R&D for more than 25 years, with the past ten years focusing on business development with Israeli technology companies. They’ve joined forces to create a company that’s tackling the high demand – more than 200 million monthly and 6 million daily searches in their target market – for quiz services and apps.

But they need some help to keep on doing it.

QuizRevolution is clearly on the path toward being a lead player in the interactive quiz field. In order to get there as quickly as possible, they’re currently seeking funds from accredited investors in a private fundraising round on Fundable.

Interested in increasing your website’s sticky factor? Head over to QuizRevolution.com and watch your users stay on your site much longer. And if you’re an investor looking to jump on this runaway train? Check out QuizRevolution on Fundable for more information.