It is easy to feel like a slave to social media – especially if you’re not awesome at it. There is a special type of shame that goes with realizing that 14-year-old girls are better at some parts of your job than you are. This is not knocking 14-year-old girls. It is painfully clear that this particular demographic has insane communication skills. And at the end of the day, that is exactly what your company’s social media presence is for – communication.

In the hunt for ways to communicate your brand and to connect to your people, you have probably had to deal with hashtags. I am convinced that nothing – nothing makes you feel older than trying to figure out how other people are using these metadata tags. In addition to making users feel old and obsolete the World over, hashtags are also incredibly useful in getting members of the public to join in a conversation.

Maybe the digital discussion focuses on a new product launch or on an underutilized feature set your company is trying to promote – either way hashtags hook people with little to no knowledge of you or your brand into the conversation. 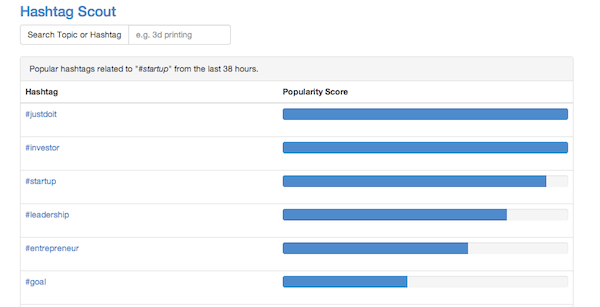 One of the latest tools to help in the fight to dominate social media is Hashtag Scout. The web-based hashtag search and finder tool lets users identify trending hashtags associated with specific words and topics. This means that users can gauge the other hashtags and words that are co-occurring with the hashtag they are using. All of this gives the user some empirical evidence on which set of hashtags to use instead of playing some digital version of word association with themselves.

Hashtag Scout is live and operating in beta. The no fuss interface is minimalistic and super easy to navigate. Users simply enter the topic or hashtag of interest into a central search bar, and with a simple click users see two feeds. The first shows popular tags related to the topic they entered (based on the last 40 hours), with the second showing other tags that have been associated with the topic.

Hashtag Scout also provides additional details for each hashtag users search for, including the estimated number of searches per day and per month as well as recent popular Tweets which include that hashtag. 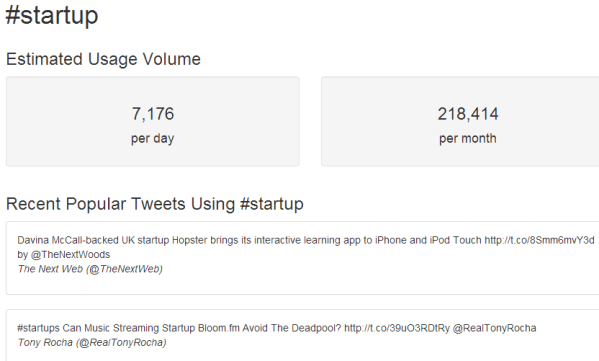 This web-based hashtag support system will help you feel like you know what you’re Tweeting about with a little more confidence. If Hashtag Scout is this useful in beta, I’m excited to see what the future has in store for this handy little tool. If you are too, sign up for their mailing list and keep in the loop (no hashtag needed).