What does a huge corporation have that you don’t? Ok, yeah – a break-room with a better snack selection and a horde of slaves interns to do their bidding. In addition to those notable perks, the big guys also have entire departments dedicated to research and development.

What do you have that they don’t? Well the good news is that you are probably closer to your target demographic than a bunch of old guys in suits (that probably cost what most people pay for cars). You know your clientele’s slang, sense of humor, and aesthetic almost intuitively, but key choices in product development can’t be made on gut instinct alone. Based on his hair and track record in bankruptcy court I think Donald Trump exemplifies the danger of “going with your gut.”

Investors like data, and feel that way for a reason. An informed decision is a good decision – period. A lot of time, money, and emotion will go into a project’s development, so it’s key to have a solid sense of your customers’ specific needs and expectations.

Despite a reputation for being boring, surveys are still one of the best tools in any industry when it comes to eliciting customer feedback. The data is pretty clear that online surveys have a notably higher incidence rate (meaning more people take them) compared to paper or telephone based questionnaires.

No need to hire a team of telemarketers, mailmen, or carrier pigeons. People are more likely to take surveys and give quality feedback online because they can do so at their own convenience. So you know that the Internet is a key player in gauging customer sentiment, but we still need to take a closer look at how people (read your customers) use and access the web. 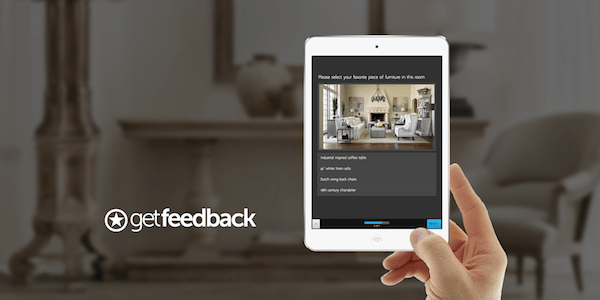 According to the Pew Internet & American Life Project, over half of smartphone owners use their phones to check the majority of their email. The same body of data shows that over 55% of Americans do most of their internet browsing on their smartphones. Other research suggests that there are 1.5 billion smartphones in use today. These numbers are expected to increase as the cost of smartphones drops. More on why phones matter later. 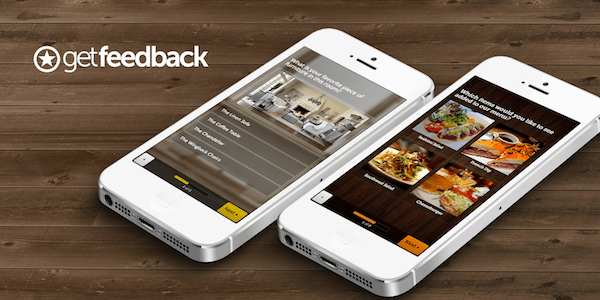 Get Feedback The Right Way

Founder Kraig Swensrud was well aware of the potential utility that surveys offered. He also knew that the world of online marketing research was a $2 billion industry. So he set off to create a product that stood out from the crowd both in function and looks.

Swensrud founded GetFeedback in March of 2013 from his base camp in San Francisco. Being “the man” behind salesforce.com (one of the world’s leading “sales, service, and marketing apps”), Swensrud was keenly attuned to both the power and mundanity associated with surveys. 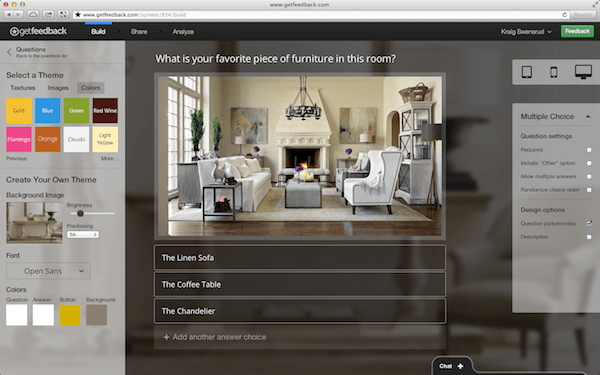 Swensrud’s final product is an app that somehow manages to make designing and taking surveys both easy and pleasant. I know it sounds like a stretch, but GetFeedback.com is loaded with features that set it apart from the competition. On top of the standard benefits that come with survey sites, GetFeedback has an incredibly user-friendly design experience without sacrificing users’ abilities to customize.

No really, even though there are loads of pre-built survey templates (for a host of categories) users are able to customize their surveys down to things like what the “next” button says to the shapes participants click to give a rated answer to a question. If a template isn’t your thing the survey builder tool allows you to build your survey from scratch using a format similar to PowerPoint Keynote. 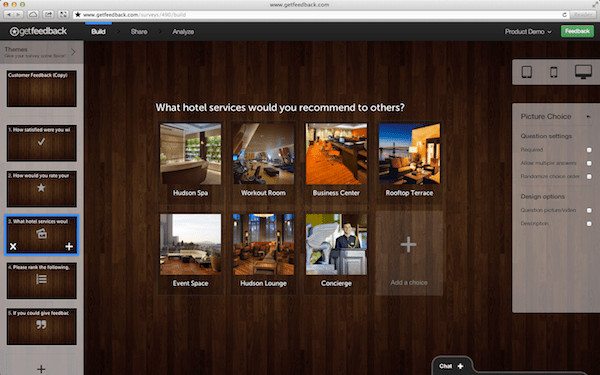 The process may be simple, but the content is anything but. GetFeedback’s tools enable users to create surveys that stand out from the run of the mill questioner. Their general esthetic is modern without being cold, and conveys a sense of the contemporary while still managing to engage participants. One of the biggest standout features has to be the way video (from YouTube or Vimeo) can be incorporated right along side the company’s branding and other imagery. You can even search Google for an image without leaving the app.

GetFeedback’s surveys aren’t just pretty, they’re really (really) functional. Remember that stuff about mobile devices being a big deal? Well, Swensrud’s team has got you covered there too. The survey you designed is automatically optimized to the device it’s being viewed on, (including any and all of those 1.5 billion smartphones). So the take away here is that it looks like there is finally a marketing tool that is just as dynamic as you are.

GetFeedback.com currently has a waiting list for their Private Beta program, but the first 100 readers of KillerStartups who click here can jump to the front of the line and get immediate VIP access. Enjoy!