Fun And Fast: fuseGap Has The Facts

KillerStartups > Startup Spotlight > Fun And Fast: fuseGap Has The Facts

One in five Americans thinks the sun revolves around the Earth. This, my fellow citizens, is a pretty serious problem. If 20% of our population still believes something that was conclusively disproven by Galileo in the 17th century – a fact so basic and simple – then how can we ever have a functioning democratic government?

That’s the argument put forth by a new site called fuseGap. The founders behind this fun, interactive learning website believe that an informed citizenry is an essential part of a working democracy.

Considering the quilombo (fun fact: that’s an Argentine Spanish word that means, loosely, “big f-ing mess”) that is our current democratically elected government, I’m gonna go out on a limb and say they might have something there.

The signup process is quick and easy. All you have to do is link it to your Facebook and you’re good to go on to the fun part: the fact learning competition.

This is fuseGap’s “special sauce,” at least for the competitive among us. Any site that pits me against other users is one that’s going to have me coming back for more. I lost my first round of fact checking, which made me feel a little dumb but also made me want to keep trying.

What can I say? I have a competitive nature.

What are you going to learn?

This site is perfect for those of us who care about political and social issues, know we should be paying more attention, and still aren’t. With categories like “Federal minimum wage,” “Offshore drilling,” and “Marijuana legalization,” fuseGap covers a wide spectrum of current events. 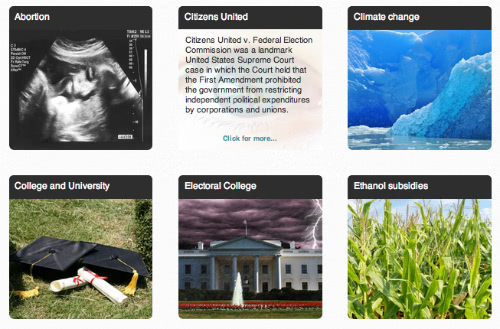 The truth of the matter is, our collective ignorance is a combination of two major factors: a lack of desire to learn and a lack of time to do it. While the first one is something we all have to work out on our own, fuseGap effectively tackles the second by breaking down the facts in easily digestible parts.

And even if you don’t care so much about the topics they’ve listed, who doesn’t want to sound smart at the next dinner party?

The Million Fact Challenge (aka MFC)

If competition alone isn’t enough to draw you in, fuseGap also has a challenge that they’ve put out to all of their users. They’re aiming to collectively learn 1 million facts, so every time you answer a question on their site, it contributes to that goal.

Watching the little bar on the left hand side of the homepage rise as you answer questions is surprisingly fulfilling. Guess there’s just something nice about knowing you’re part of a bigger movement. 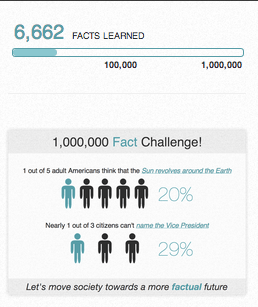 When it comes down to it, this site has a huge goal: changing a major part of American culture. If you want to be part of a better-informed citizenry, head on over and see how you match up against your fellow Americans. It will take less time than reading the newspaper and you’re guaranteed to feel a bit smarter in the end.