Fundable is rocking it these days! Last month, I told you all about the big news that our favorite crowdfunding site had acquired LaunchRock, creating a super-company than will help guide startups from conception straight through to acquisition. Now, less than a month later, I’m excited to share the fact that Fundable has taken that acquisition and run with it.

Fundable just announced today that they’ve gotten over $100 million in funding commitments to startups over the past 18 months. That funding is going to the 500,000 startups Fundable currently supports and the 15,000 more they’re adding every month.

But why would I pick these guys over, say, Kickstarter?

While I’m totally behind Kickstarter and Indiegogo and think they’re great resources for projects and products seeking funding, they’re just not created for the level of funding startups typically need to go through.

The great thing about Fundable is because they focus solely on startups, their funding process is a little different than the broader crowdfunding sites. Founders are able to offer equity in addition to the traditional rewards found on crowdfunding sites, giving their backers a chance to own part of the company they like so much. 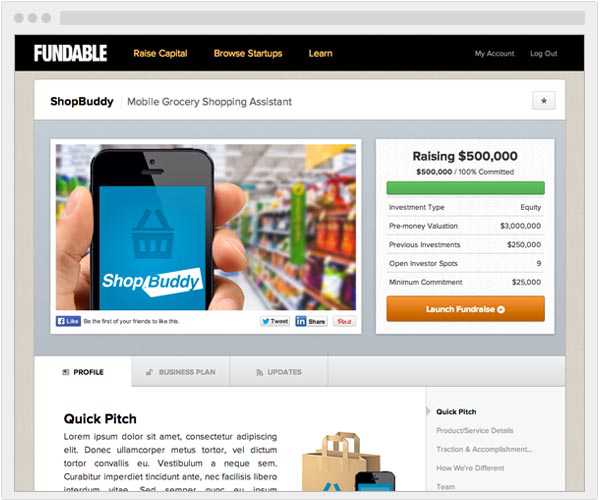 And there’s no reason you can’t do both!

Kickstarter and Indiegogo can be a great way to gauge interest in your startup and to get that initial little boost of funding, creating a scalable business is a whole other ballgame. That’s why companies that start on Kickstarter and Indiegogo should consider taking the same path that Hidden Radio, Ube, and Uncharted Play took and get on Fundable for their next stage of fundraising.

“We are thrilled with the incredible success that companies have found through Fundable,” veteran entrepreneur and Fundable CEO Wil Schroter said. “It’s amazing to see companies using funding to grow real businesses that are creating jobs and making an impact on the economy.”

The bottom line is, fundraising is hard no matter if you’re doing it alone or with help. Fundable has an impressive record of guiding startups through the long and arduous process of raising money and from the looks of this announcement today, they’re only getting better.