Stupd aurcorrect! That not whatch I wa trying to write at all.

Tired of your texts coming out garbled like this and then needing to edit them? Reason #567,000 for selling electronics and sledgehammers separately. For the sake of my blood pressure, I will skip the rant and go straight to saying that I’m thrilled to come across the keyboard app Fleksy.

The End of Typing Dissatisfaction

Fleksy uses predictive text technology to make it easier to type on touchscreen surfaces to help prevent those pesky autocorrect fails. Designed by Syntellia and using the QWERTY layout, Fleksy flexes keyboard muscles that intend to overpower the competition.

Instead of relying on precision as other typing engines do, Fleksy analyzes data to intuit correct words, while allowing for a huge margin of error. How huge? Fleksy boasts that even if you miss every single letter, the app will still figure out what you intended to type. That’s right, you can even type in the air without hitting the keys at all!

The visually impaired and blind individuals helped test Fleksy to refine the algorithms used to achieve predictive supremacy. As added improvements over the traditional keyboard, Fleksy also maximizes the typing area. No more hunting for small command keys or inadvertently pressing useless function buttons. The space button – that’s gone too in favor of using gestures. I’ll sort of miss that old friend, although it’s been more problematic than anything on smartphone keyboards.

How many times have you simply deleted a text rather than attempt to go back and fix all the errors. For the lover of complete sentences, touchscreens and texting both cause a lot of heartburn to begin with – small letters, unintentional wording, and awkward editing tools only add to the pain. Fleksy’s accuracy will defuse a lot of anger.

What’s more, the ability to type faster – eyes freed from the keypad – means greater productivity for everyone. Fleksy makes mobile computing a much more attractive option that may eventually rival desktop preferences. If you’re not hesitant for fear of making mistakes, it’s much more appealing to reach for the tablet or smartphone to create content.

With over a billion smartphones in use already, and nearly everyone sharing the same typing grievances, it goes without texting that the potential market for Fleksy is enormous.

The app is already available in iOS and in beta testing for Android. The website encourages feedback as to what other applications users would most like to see adopt Fleksy (the pie in the sky being Fleksy incorporated throughout Apple’s platform). 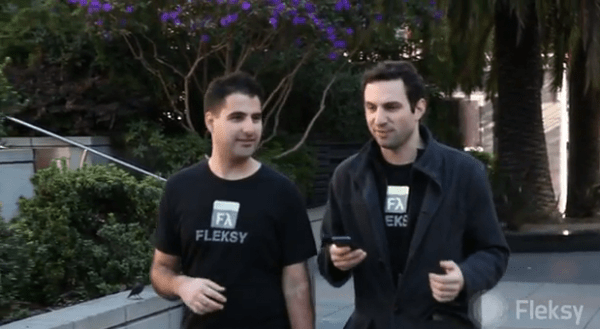 Fleksy has been piling up awards. Most recently, the app took home the Grand Prize accolade in Mobile Technologies at the 2013 SXSW Accelerator. Co-founders Kostas Eleftheriou and Ioannis Verdelis have impressive IT resumes behind their startup, including previous successes founding GreatApps and ZuluTrade – developing and selling technology to the likes of Google.

Fleksy asks users to take the leap, and leap is good verb to have chosen, because the app has bounded beyond the competition. Swiftkey uses predictive technology as well, but offers a less natural typing system. And Swype requires a lot of initial effort on part of the users, often standing in the way of people taking the plunge. Fleksy lets you type on the touchscreen faster, more naturally, and more accurtely. I meant accurately. Damn, now I need a Fleksy for my desktop.