Last week we treated you all to a sampling of some of the hottest guys in tech. Since you seemed to like it, I thought I’d follow up with an in-depth interview with one of those hotties, Ecoswarm founder Pranay Krishen.

While some people seem to think that caring about the environment belongs solely to those among us who think patchouli is an excuse not to bathe, Pranay is out to prove them wrong. Dedicated, well-spoken, and passionate about sustainability (with the credentials to back it up), Pranay is a new kind of eco-warrior.

I caught up with Pranay this week to chat about how Ecoswarm is going to change the world, how ant watching can make for a fascinating afternoon, and growing up on ships that sailed the world. 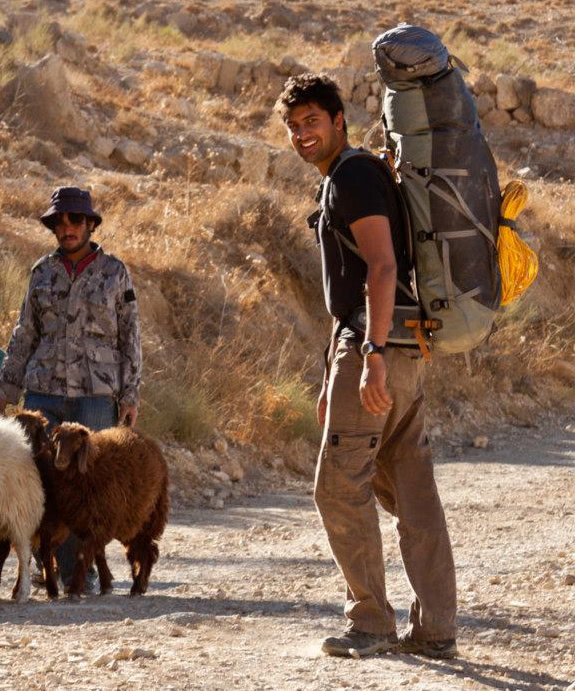 Ecoswarm is, as far as I know, the only online platform that is dedicated to sustainable development.  We feel that until and unless we can bring the various stakeholders in the sustainability sector onto one page – from the consumers to the businesses to the governmental agencies to academia – the green movement simply can’t be as effective as it needs to be.

Ecoswarm is that page. We’re trying to consolidate all of the people, the information, and the resources, using a structured framework that’s built specifically for the green sector.

Okay, so how would someone like me – eco-conscious but not involved in any industry or academy or anything like that – be involved in Ecoswarm?

Let’s say you’re an eco-conscious citizen of this planet. You would join Ecoswarm, identify your location, select the types of content you’re interested in. That could be news, products, services, anything of that sort. Then you’d identify the sectors that apply to you. So if you happen to be a homeowner who’s interested in affordable tanks, you could identify that based on our tagging system.

Now what that would do is connect you to all sorts of information that is applicable to your interests in your location and then use that as a medium to connect with other people in the same space.

We believe that can have a big impact as far as the scalability of sustainable solutions.

Where’d you get the name Ecoswarm?

Swarm logic is something that really fascinates me. It’s a weird sort of obsession. I sometimes observe ants as they go about their daily activities; it’s weird. (Laughter)

The majority of organisms in nature use this very simple, crude logic. At an individual level an ant, for example, is a very simple creature. But if you observe their activities in groups or colonies, they come up with some pretty crazy stuff. They come up with construction styles that humans can’t do.

Behind all of that is a very simple logic and it’s dependent on communication between individuals. There’s a certain framework that happens under and we have mimicked that in Ecoswarm. We’ve developed algorithms that allow humans to work on the basis of swarm logic. That, we think, is the basis for solving our sustainability challenges because we need to work together to get this sorted out. What we’re calling our framework is swarm networking, as opposed to social networking.

What peaked your interest in sustainability?

I’m not sure. Through all my studies in engineering and business, this is just something that seemed really important. During my second year of university I got pushed into a solar car project, which directed my academics towards this kind of stuff.

I was also involved in Engineers Without Borders, which took me to the social side of sustainability in Ghana. All of that combined brought me to where I am today; I’m not sure if there was a specific incident.

What inspired you to take that interest into the tech world?

Well, I’ve always been really technical and scientific. I studied engineering throughout university so I guess it was a natural progression.

And why’d you go online with Ecoswarm?

I think that the way sustainability is being tackled right now, there’s a lot of effort wasted on spot fixes. I’m a big believer in systems, in approaching problems like these at a systemic level. The internet is obviously a huge enabler for that. It reduces communication and transactions costs. If you can get all the stakeholders in this particular sector onto one common platform through the internet, then it’s a high leverage point for systemic change as far as sustainability is concerned.

How long have you guys been doing this?

I’ve been working on this fulltime since July of 2012. We applied to Start Up Chile, we got through, came here in October, and it’s coming along nicely now.

Do you have plans to monetize? Have you gotten to that stage yet?

Absolutely. This is not a nonprofit. There’s no reason why we cannot monetize this. The green sector is the fastest growing in the world right now: it worth over 5 trillion dollars because it touches pretty much every industry.

We’re going to do it on the basis of subscriptions because there are professionals and businesses in this space that are looking to promote themselves and that need a platform to do that. On the other side, you have advertisers who are trying to target a very niche audience.

That’s our model right now. It’s a freemium model based on advertisement and subscriptions.

What’s your next step?

The next step is to get our platform online. It’s almost ready but we’re not releasing it yet because we’re trying to be perfectionists.

Yeah, I know. We’re hoping to launch towards the end of May and keep it private initially. We want to bring on some early adopters and see what they have to say, work on their feedback, and go from there.

Do you have any other projects you’re working on?

I have a green construction project going on in India that’s nearing completion. I also have a solar company in India that’s sort of on the backburner right now but solar is a huge opportunity in India given the electric grid situation there.

How long have you had the solar company?

For about a year and a half now.

And what’s your role in that?

I started the company in India basically focusing on rural electrification and power for off-grid cellphone towers because in India the electric grid infrastructure outside of the cities is abysmal. Villages don’t have power. One specific pain point is for cellphone companies that have their towers out where there’s no power and they run those off of diesel generators and waste a lot of money.

And create a lot of pollution.

A lot of pollution too, yeah, of course.

So it’s a quick solution for them. The company is called EcoAlliance.

Want to talk about ships?

I mean, I grew up on ships throughout my primary schooling, so my mission in life is to someday build my own sailboat with wind and solar power for all auxiliary systems.

My dad was and still is in the merchant navy so I basically traveled every ocean in the world with him. I somehow survived school as well, then moved to Canada and did my high school and university.

Since then I’ve lived in Australia, Jordan, back to India, and now Chile.

So when you were going everywhere in the ships, did you stop off in places?

Oh yeah, absolutely, absolutely. Unfortunately I was too young to remember a lot of it, but it was great because I saw the world at a really young age. Since then I’ve been really passionate about traveling. Everything I do now is in one way or another motivated by traveling.

Including Start-Up Chile. That was one of the key selling points for me.

How has your experience with Start-Up Chile been so far?

It’s been incredible. There’s really nothing I can complain about. The best part about it is the fact that it’s peer-based. We’re meeting people from all over the world and it’s interesting to see the different approaches to different problems.

Last question. How do you feel about being named one of the 16 hottest guys on KillerStartups?

Um, it’s… Yeah, I’m flattered. It was a surprise. It’s not the sort of recognition I was looking for as far as Ecoswarm is concerned, but it’s always nice.