Breaking Down The Barriers To Affordable, Easy 3D Printing 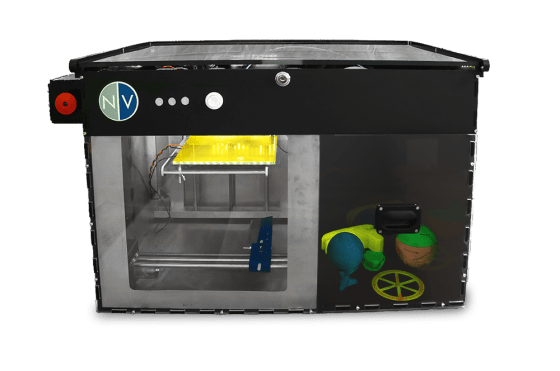 3D printing is hot right now. We just can’t seem to get enough of those crazy machines that turn our 2D ideas into 3D reality, one extremely thin layer at a time.

But here’s the thing: Who really knows how to use them? Even more importantly, who can afford to own one? Answer: Basically no one. The machines are still very expensive and have a high learning curve. Additionally, one little bump to those bad boys can mess up an entire printing process, forcing you to start over from the beginning.

Well, there’s a company that is out to change that.

They’re called NVBOTS and they’ve just announced a brand new solution to both the cost and accessibility issue. They’ve created the world’s first fully-automated 3D printer and hope to see it transform how these tools are used in STEAM (Science, Technology, Engineering, Arts and Mathematics) innovation as well as in business.

“I see game-changing applications popping up in nearly every vertical segment every day; medical, automotive, aerospace, agriculture, you name it,” CEO AJ Perez told KillerStartups. “Our mission is to enable the individual inventor or a team of designers to compete in these spaces. By providing the next generation with the skills and simple fabrication tools, I believe that we will see a radical paradigm shift in the innovation cycle. No longer will access to capital equipment limit the potential of a creative mind.”

What makes the NVBOTS 3D printing solution so special?

First of all, the printer can be accessed from any device – computer, phone, or tablet. It’s also cloud-based, which means that users can upload their designs and manage the entire process from start to finish without ever touching the printer itself, reducing the risk of messing up the print job. You can also monitor the progress of any printing job remotely via their built-in camera and you can rest assure that your object is safe inside the printer’s protective enclosure.

They also have an included 3D printing curricula to help with hands-on learning, a higher quality Filament than most 3D printers claim, and full service support to all of their users. They also offer both educational and commercial packages, both of which include flexible leasing plans, cutting down on the overall cost of the printer and service.

The company has already launched their service at MIT’s Martin Trust Center for Entrepreneurship, Newton North High School, and North Central Charter Essential School. They’re also planning on having 100 NVPrinters up and operating by the end of 2014.

As for fundraising, NVBOTS is currently seeking crowdfunding on Fundable. They’re also currently participating in Fundable’s Crowd2Shelf Contest, a partnership with Staples that provides the winner with the opportunity to sell their products in Staples stores.

Think NVBOTS has a great thing going? Do them a favor and head over to their Crowd2Shelf page to vote for them. You can also help them push better accessibility to 3D printing by contributing to their crowdfunding campaign.