My nephew Salvador will be part of a generation that will one day talk about the educational applications that he played with when he was a kid. This freaks me out a for a lot of reasons. I worry if he’ll ever want to play catch with me like I did with my uncle. I imagine he’ll be teaching me how to use the latest gadgets soon, and I’m not ready to start writing (ah, I’m already doing it) about how quickly things change… I’m not ready!

When Salvador reaches for my smartphone on the table, he reminds me of just how far bygone are my days of playing with G.I. Joe action figures and my beloved, stretchy Incredible Hulk. On the upside, instead of playing with comic book-inspired toys, Salvador might just be drawing his own (he’s named after the painter Dali, so he’s bound to take shape as an artist of some kind). This development I can accept.

Salvador might very well use Duck Duck Moose’s app, Super Hero Comic Book Maker, to invent an identity for his dream powers and bring to life his nightmare monsters. If I had more time, I’d be tempted to give the app a whirl and build a comic strip myself.

When our children choose to snatch phones from the adults instead of running for the swing sets, we can at least equip them with high-quality educational apps. Duck Duck Moose products are definitely a great option. Their handiwork has already racked up 14 Parents’ Choice Awards and 13 Editor’s Choice Awards.’ The company relies on educators and parents to test each app. A recent $7 million Series A round of funding should help them to continue creating and promoting their products.

I’m comforted to see that Duck Duck Moose apps haven’t abandoned content recognizable from my childhood. There are still games of peek-a boo, but with zoo animals. The Itsy Bitsy Spider still crawls up the water spout, but now through interactive scenes. The company’s first app visits that familiar tune “Wheels on the Bus.” Kids will still be kids, only with tablets and phones both schooling and entertaining them. 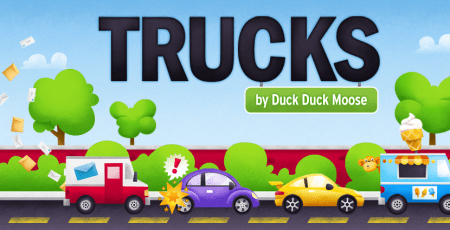 Duck Duck Moose’s apps for purchase (mostly $1.99) have already been downloaded over 2 million times. The wife and husband team, Caroline Hu and Michael Flexer, founded the company in 2008 along with designer Nicci Gabriel.

The Flexers share a musical and business background, in addition to being parents. Caroline took up the violin when she was five. After attending school at Princeton, Harvard, and Stanford, she went on to work for IDEO as a design consultant and a product manager at Intuit. Michael started playing cello at age seven. He’s a veteran now of Silicon Valley startups such as Sharpcast, C3, and Siebel Systems. Before coming to Duck Duck Moose, Nicci’s award-winning designs employed her as the Creative Lead at Sharpcast.

While the Product Managers at Duck Duck Moose might be younger than those at other companies (ages 6, 4, and 1), they’ve quickly grasped the key to top-notch development – payment in snacks.