DigitalUndivided: The Social Enterprise With A Kick Ass Mission

The fact that there is this massive gender gap in the worlds of entrepreneurship and startup activity shouldn’t come as news to anyone, but that doesn’t mean that we should just accept it as being inevitable. The statistics on the subject are pretty grim. Female entrepreneurs receive much less than their male counterparts in early funding efforts. Some industry experts assert that women get a measly 15% of early stage capital despite the fact that they comprise half of the companies being founded. 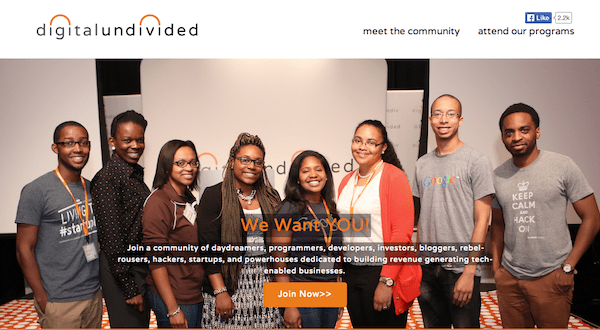 These stats look even more bleak when you do the math on opportunities being given to women of color trying to get a startup up and running. I’ve never been one for numbers, and feel my faith in humanity restored when I hear stories like that of Kathryn Finney and the social enterprise called DigitalUndivided that she founded.

Inspired by her dad’s journey from working in a brewery in Wisconsin to getting an internship with IMB which changed his career and life forever. Finney’s father went onto to become an engineer and ended his career as an executive for EMC. The story of his career and accomplishments are made all the more impressive by the fact that he didn’t graduate high school.  Her dad’s experience is more than a success story, it is proof that skills and passion make for great leaders (not where they were born or the kind of money they come from).

Finney founded DigitalUndivided to help people of color, especially women of color, to gain access to the “digital world.” The tech industry is all about networks. Being part of a good one (or two) is key for successful career development. This is one of the biggest barriers folks of color and people from urban areas have to grapple with when trying to enter this sphere – accessing these networks can be a real bitch if you don’t fit the standard white or Asian straight guy mold.

DigitalUndivided provides a community and network for smart innovative people whose identities deviate from the standard profile. This pipeline of bad-ass POC that know how to code isn’t just good for black entrepreneurs, it’s good for the industry. Diversity is good for business because having a team with diverse backgrounds results in problems getting approached from different perspectives, which means that problems get solved more efficiently and ingeniously. PERIOD.

Finney proudly declares that her organization believes in “skill over pedigree” and has formed an organization that achieves measurable success in fulfilling its mission to diversify the tech industry. DigitalUndivided points to their evidence based “DID” model as being one of the sources of their success. The model is based on investing in promising ideas and companies that arise from the various outreach efforts and workshops they do in urban areas. It also hooks promising people up with successful mentors – expanding networks and giving good ideas room to grow into something great.

Oh and they have membership offerings which give people access to advice from experts, tickets to FOCUS 2014, and free help from programers and developers. Definitely something to think about if you are looking to invest in yourself. Find out more now at DigitalUndivided.com.