Back in June of 2012 I spoke with Sean Wycliffe about his company Dealflicks, what was then a brand new website that connected movie lovers with massively discounted tickets by teaming up with theaters who wanted to fill their empty seats. It seemed like a no-brainer to me: movie theaters made money they wouldn’t have otherwise made and viewers got to see their favorite flicks at 40-60% of the cost.

Now, almost two years later, Dealflicks is going stronger than ever. With more than a million raised and partnerships across the country, the company is expanding daily. Sean’s co-founder, Kevin Hong is currently on a cross country odyssey they call The ManVan, meeting up with theaters in order to form partnerships nationwide. I talked with him recently via Skype about what it’s like to live in a minivan with three other dudes for six weeks, how he’s getting crazy fit while doing it, and what we can expect from Dealflicks by the end of 2014. 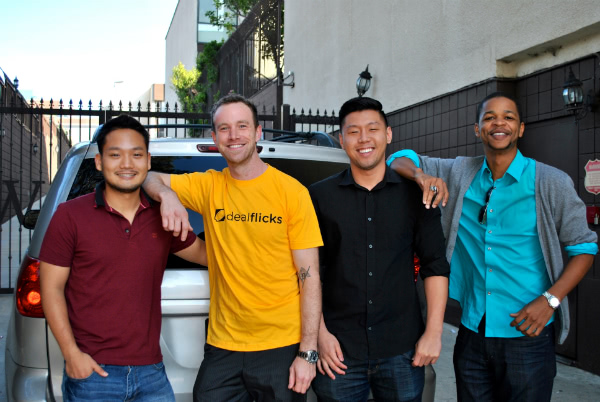 It sounds like you guys have had a lot of success since our first interview. Want to talk a little about that?

Yeah, absolutely. I think back then we only had about three theaters and now we’re actually close to 300; 270-plus locations nationwide. We just partnered up with the fifth-largest chain, Bowtie Cinemas. We’re trying to partner up with the top four chains right now and hopefully we can get a couple of them signed before the end of next year.

We’ve made quite a bit of progress. We think that at the end of the day we can really provide value and become a true value prop for the whole movie theater ecosystem in general.

And you guys raised some funding.

We’ve raised a little over a million dollars right now and we’re currently raising a little bit more. We’re probably going to do a Series A later this summer or later this fall and we’re really excited about that.

Yeah, I guess so. He should probably feel half successful now because it’s debatable whether we’re nationwide. We’re in like, 30-40 states but not all 50.

If we annualize our revenue from the past couple months, it is seven figures. That’s truly exciting and what were the other ones? Living off of savings. Well, we’ve raised enough money that, unless he’s been splurging, he shouldn’t be living off of savings.

Tell me about the ManVan.

We really understand how the theater industry runs – it’s completely a face-to-face business. A lot of the deals are done over handshakes, steaks, wining and dining; all that kind of stuff.

So we had this crazy idea of going cross country, living in a van, working in a van, making cold calls, have one person drive and another sleep in the back to hit up as much theaters as possible over the course of a couple of weeks.

This is actually our third ManVan; we did it once last spring, once last fall. It’s really exciting because not only do we save a lot of time and money but it increases our conversion rate tremendously. It’s a crazy idea.

I know that Steve Wozniak and Steve Jobs had the garage; Dealflicks has the ManVan. 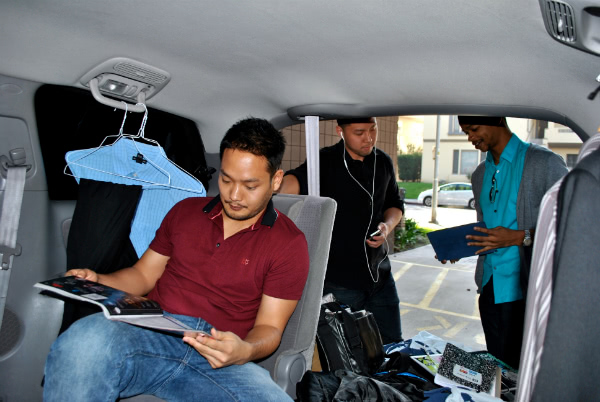 What kind of van is it?

It’s a Toyota Sienna. If you take out the seats in the middle, you can fit a queen-sized mattress. That’s what we did: we took the middle seats out, lay down the backseats so it’s pushed forward all the way to the floor and then we just put a giant mattress in there and move all of our stuff to the front seats.

What we do is assign two individuals per van. Right now we’re traveling in a crew of four. If we hit a certain city, we’ll rent another band and do a split, so sometimes we’ll have up to four ManVans going around the countries.

It’s kind of like Transformers, you know? They combine back into one force and move on to the next city and eventually do a tour of the whole city. It’s crazy; it’s exciting.

Right now we’re currently trying to promote our brand and we’ve been doing a lot of social media stuff. We’ve been doing some really fun things like, the other night, we did a little competition. Ryan had to eat a massive burger at Jack in the Box in three minutes. He was doing really well until I guess he had too much burger and not enough liquid. We have this clip of him dipping fries in his soda and trying to down it.

It’s so ridiculous! He covers it in barbecue sauce and ketchup, just trying to make it go down and he just missed it. He was almost there but it was too much fries; he should have ordered a small and not the medium.

We’re having a lot of fun out here.

Yeah! It’s been fun and we’ve been getting a lot of deals. 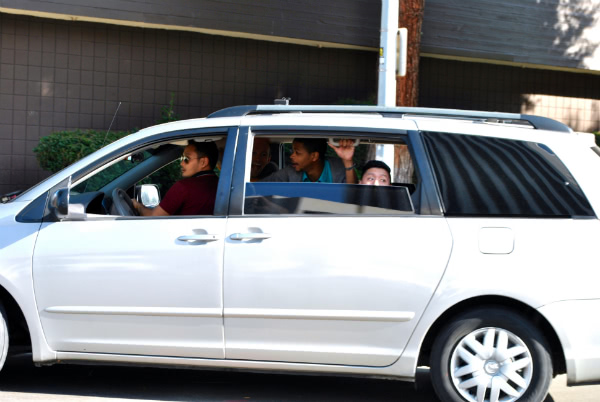 Where do you shower?

What we do is get a gym membership. I think last year, for ManVan 1, I was down to 12% body fat at one point because I was going to the gym to shower and since I was there already it was like, oh, I might as well do something.

You’re already incentivized to want to shower every day so I was going every day to shower and it just made sense to work out too.

So, yeah, I’m excited about getting fit again!

How big is your team now?

I think we have about 17 all together, between part time and full time. We have seven paid interns as well as some people who are helping on the marketing site working part time. We have four ManVanners, a couple of account managers back home, and five or six people on the product side.

Are you based in LA because the movie industry is based there?

Yeah, it definitely helps. We got some seed funding from Media Camp, a WarnerBros accelerator program and we’re working on partnering with some big studios later down the line. Strategically, it just makes a lot of sense.

Our technical team is in San Francisco, actually, so we have two offices: one in LA and one in SF. 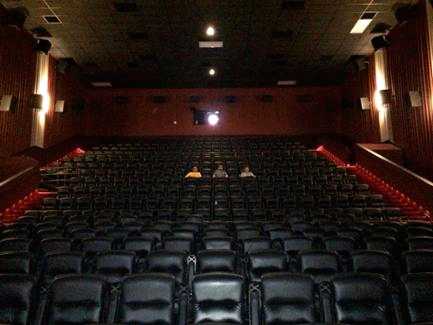 What can we expect from you guys by the end of 2014? What’s the quote I’ll throw at you next time we talk?

Well, I think we can probably get to at least 500 to 800 locations nationwide. That’s when we’ll be able to say that we’re truly a national brand and Dealflicks has arrived. I think we could generate over half a million in revenue on a monthly basis. We’ll also have ads on our website as well as expansion into Canada. We’re going on our first tradeshow in Canada in June so we should definitely have a few theaters up there.

What else? Series A will either be starting or we might have completed raising it.

It must be hard to fundraise while you’re also doing these road trips.

Well, that’s why we have Sean. I get the theaters, he gets investors.

So he gets the shitty part.

Yeah, totally! No one likes to raise!

Well, I guess. I don’t mind living in a van, so I can’t complain.

I think what you’re doing sounds like a lot of fun. I’m jealous; I travel a lot but I don’t know the US very well so I think that’s really awesome.

Yeah, it is. That’s the cool thing about doing the ManVan, although it does get tough after a couple of weeks. You start to stink, the van starts to stink. You’re with the same group of people for so long that it comes to a point where you start getting sick of each other.

That’s why we shortened the trips. The last one, ManVan2, was 16 weeks. It was way too long and everyone just started hating each other and we realized it was really bad for our culture so we chopped it into to.

Yeah, the point of the trips is to grow your company, not destroy it, right?

Yeah, it just imploded on us but this one should be fine. We’re mixing it up. For example, we’re going to New Orleans this weekend so the boys can have fun. We’re going to Vegas and then we might spend a weekend there so we can go out and party again. We’re trying to develop a “work hard, party hard” mentality because last year was just “work hard, work hard.”

This time we’re trying to make it much more sustainable.

Well Kevin, it’s been awesome. Keep us updated on your journeys!

Courtesy of the founders