If You Care About Company Culture, Look At Workflow First

KillerStartups > Startup Spotlight > If You Care About Company Culture, Look At Workflow First

It’s the simple things that build company culture. Your team doesn’t need to run around in the woods shooting paintballs at one another, get into a bar brawl together, fall from dizzying heights while blindfolded into each other’s arms – not that there’s anything wrong with any of those activities. I say as long as full-time employees are exposed to the same risks as interns, party.

At the same time, working well together will do just fine. Tasks accomplished, projects finished, communication made easy, all manage to bring a team closer together than any extracurricular shenanigans.

Better yet, add a social element to workflow, and the combination of easy interaction and swift progress makes a winning formula for building company culture. Bitrix24 offers a perfect example of this formula put to use in the workplace.

For those unfamiliar, Bitrix24 is a cloud-based collaboration platform. It’s a lot like Facebook for the workplace in both appearance and function. You can share documents and pictures, hold private and public conversations. An Activity Stream (a la news feed) makes exchanges easy to follow. Only, instead of everyone being kept in the loop about the most recent amazing cat photo, employees stay current with the work that pays the bills. 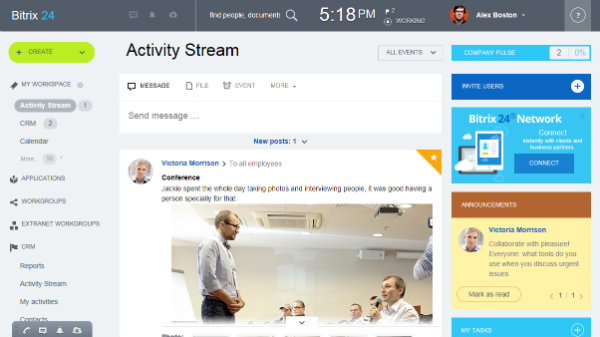 Bitrix24 resembles social networks and other tools (e.g. Google Drive) for good reason – it makes tools easy to adopt and simple to use. The benefit of implementing the entire platform is that it keeps a number of tools under the same roof. With Bitrix24, it’s possible to manage tasks and projects, store and share files, call customers, get a handle on CRM and HR, and more.

Flat is the New Black

In just over 2 years, over 250,000 organizations have signed up for an account. The growing company recently added a number of features to improve UI and provide more resources. Bitrix24 now sports a flat design – giving the site a more modern look and helping it to play nicer with responsive designs (important as teams rely more and more on multiple devices). Performance speed for the cloud service has been made nearly 40% faster. Other changes include the following:

These upgrades make this Intranet an extremely efficient network – and allow for workers to unite more effectively on a greater number of tasks.

“Unlike our competitors, we decided to stick with flat pricing for our cloud offerings, and both our $99/mo and $199/mo plans still come with unlimited users,” says Bitrix24 founder Dmitry Valyanov, “…our top plan now includes unlimited online storage and Bitrix24 standard users can get 100GB instead of 50GB for the same price.”

Why play bad cop and force employees to shelve networking skills when the same talents can be directed toward strengthening communication among team members and getting work done quicker? Visit Bitriz24 to learn more about how it might enhance collaboration within your business.