Everyone in the family pitching in to buy grandpa that set of golf clubs he’s always wanted sounds like such a great idea. But then someone wants to buy him a different gift. Someone thinks she should pay half as much as the others. Someone has to collect the money, and inevitably nag holdouts for their share, and that someone eventually wants a new family after promised contributions never arrive. Avoid such holiday season nightmares by managing your group payments with Buyvite.

Buyvite is a group buying platform and service that lets people split costs socially and easily. Say you’ve agreed to forgo gifts this year all together and take a communal vacation. Fantastic, but you run into the same logistical problems chipping in for the beach house that you would when making joint purchases. Buyvite steps in and does the dirty work. Without driving each other crazy, Buyvite helps members of a group pay each other, pay together, or get paid back for group purchases.

An Invite To Buy Something

Instead of shaking each other down for cash, Buyvite organizes and streamlines the group purchasing process, making monetary exchanges less awkward. Here’s how it works:

The Buyvite process for collecting money works the same way regardless of whether you make purchases before money has been pooled or afterward. Invited contributors see a dashboard with purchase details, fundraising progress, personal instructions, and a check list of who’s in on the action. 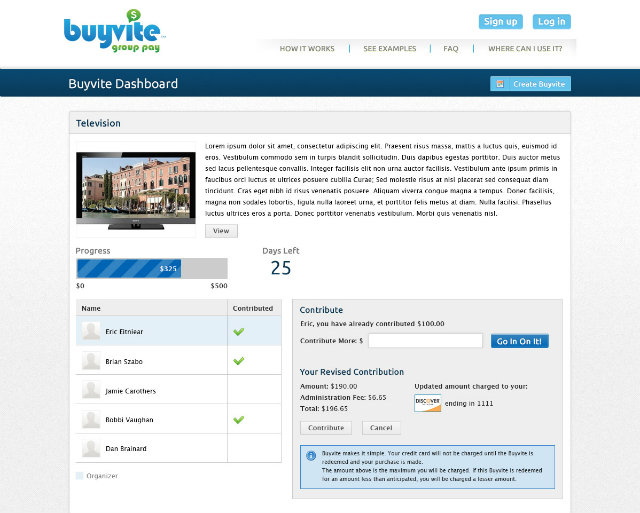 Some Buyvite partner sites have a handy “Split the Cost with Friends” button. Show others what you bought and send repayment information directly from the retailer’s shopping cart. Contributors aren’t charged until the organizer decides to send the collected funds to their bank account. Buyvite collects a small service charge for group purchases made.

There are a number of situations beside giving group gifts when the Buyvite system would facilitate social payments conveniently. To name just a few:

Brandy Alexander-Wimberly founded Buyvite in Toledo, Ohio, and serves as the CEO. She also founded the mobile marketing company Cheetah Interactive. Buyvite has now expanded its team to Chicago. Their company mascot was recently spotted at a TechCrunch event in Detroit. 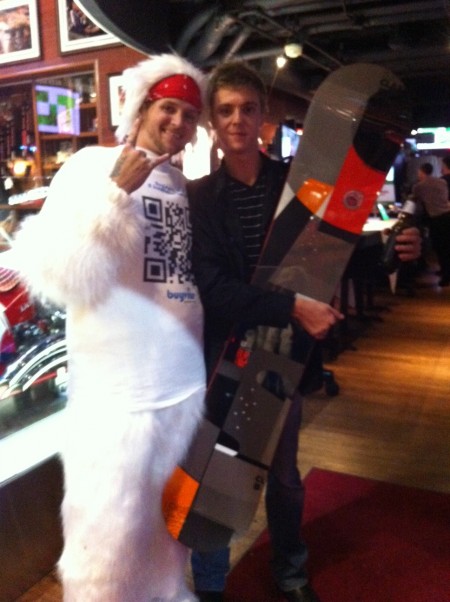 Now, can the Social Payment Yeti decide who’s in charge of organizing group payments this Christmas?