Why This Startup Is More Likely To Succeed

KillerStartups > Startup Spotlight > Why This Startup Is More Likely To Succeed

How many little kids answer the question, “What do you want to be when you grow up?” with the response, “I want to be a tollbooth attendant”? Probably none, right? Kids dream of being the president or a movie star or an NBA player. They want to be astronauts and famous actors, not accountants or even lawyers.

Startup founders are similar in their dreams. The sexy ideas – the next big photo app, the social network that will join ranks with Facebook and Twitter and Pinterest, the piece of software that will revolutionize how we do something – draw the biggest crowds. With sparkles in their eyes, these entrepreneurs set out to create The Next Big Thing.

And the majority of those entrepreneurs fail.

I’ve never seen the numbers, but I’m going to take an educated guess and assume that the likelihood of creating that next big social network or photo app is almost as likely as becoming an NBA star. I’m also going to guess that the businesses that succeed are more like tollbooth operators (i.e. companies that help make everything run smoothly) than astronauts.

For example, let’s take a look at Booksteam.

Booksteam is a company that addresses a problem faced by hundreds of thousands of companies: how to efficiently make and record appointments for their clients. The old school way is obviously picking up the phone and making  call but, realistically, how many people actually make phone calls these days?

In my own personal experience, I know that I avoid the phone like the plague. I’m actually currently procrastinating making both a doctor and dentist appointment, largely because I hate calling and I highly doubt I’m the only person out there who’s doing that right this minute. 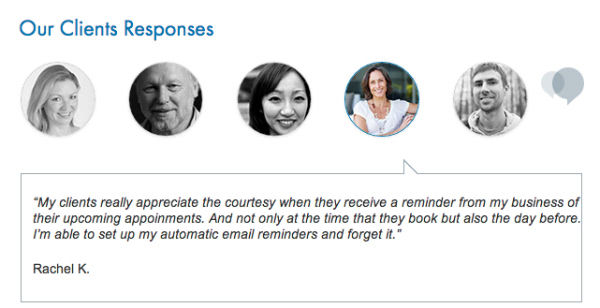 If my doctor and dentist had Booksteam, I ‘d be able to take care of everything without dialing even one number while on their end they’d be able to build up their customer database, collect business stats, collect customer reviews, use email and SMS updates, integrate with Facebook, and a whole bunch of other features that I know for a fact they don’t have right now.

And so, future and current startup founders, consider this: While Booksteam may not be tackling the sexiest field out there, they are providing a solution to a problem that is faced by thousands of people all over the world and that, my friends, is a damn good place to start. Check it out now at Booksteam.com.