Everyone says that the most important part of any startup is the team, and Eddie Laux and Sergio Prado have that element down pat. These best friends and co-founders met on a post-college Euro trip and are now hunkered down in San Francisco, pounding the keyboard while still finding time to keep fit as they develop their fitness and lifestyle app BodBot.

Eddie has a degree from Columbia and a background in neuroscience, while Sergio graduated from Harvard and worked for Google and Microsoft before venturing out on his own. These two laid back guys have combined their superpowers to bring you a personal training service that focuses on your specific needs, rather than just reminding you to get your big butt to the gym.

Despite an in and out internet connection, I caught up with the BodBot boys for a fascinating conversation about the perils of internet in rural Missouri, the amazing personal body transformations they’ve gone through, and how studying neuroscience can lead you to startup land.

Before you start reading, here’s a brief note: BodBot has a fundraising campaign with Fundable until March 21, 2013. If you like what you see, head on over and check it out!

Hi guys! Sorry about the wonky connection; I guess we’re going to have to do this on voice chat.

Sergio: That’s totally okay. We work from home so we’re generally unkempt. I think that’s probably the most diplomatic way to put it.

Ha, okay, so you understand the mobile office issues, then.

Eddie: Oh yeah. I used to work for a consultancy business in New York but they didn’t have an office in London so every time I went out there I would literally just plop down in a Starbucks and work for like, 18 hours, trying not to be distracted by the espresso machines.

That’s pretty much my life at the moment. I have internet in my house but I live in a kind of rural area so it doesn’t really work.

Sergio: I can sympathize with that. I grew up in rural Missouri and my family still has dialup, so when I go back home it’s really painful.

No way! Dialup still exists?? I can’t even believe that.

Sergio: It does in the most rural parts of America, apparently.

Where are you guys located now?

Nice. Tell me that story.

Sergio: We both kind of randomly ended up at this hostel and then became friends on Facebook. Eddie was just leaving his job in London, I was landing in London doing my post-college Euro-trip, and we ended up traveling together for about a month. We did crazy things like the running of the bulls in Pamplona, sleeping on park benches, that sort of thing. 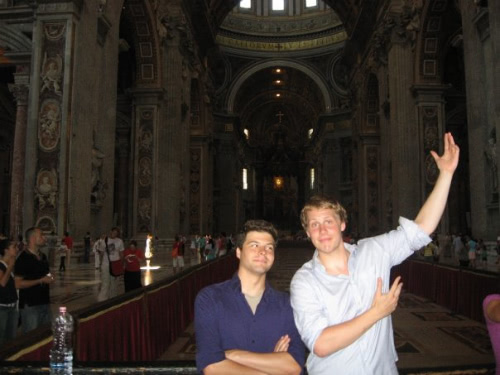 How’d you go from sleeping on park benches to starting BodBot? It seems like a pretty big leap.

Eddie: It’s something I’d already been thinking about. Sergio was working at Microsoft at the time, so I was kind of fumbling around and we reconnected. Sergio came back here, I moved to San Francisco, and we started working together.

Sergio: As far as what motivated that specific work, Eddie and I both grew up not in the best of places physically. I was extremely skinny: 120 pounds at six feet. I was very, very skinny.

Eddie: And I was actually obese, my whole childhood up through being a teenager, and at 16 I lost 70 pounds through hardcore training and nutrition.

So after I lost all that weight, I started playing basketball and then ended up on the crew team at Columbia. I was getting exposure to different athletics and training methods that you use to perform at a high level through those. Then I ended up fracturing my back rowing, which I actually didn’t realize until some time after when the constant pain just never subsided. That kind of gave me a perspective on kinesiology and therapy and training.

I also was studying neuroscience at Columbia and one of the things that we studied was the neural regulation of appetite and weight. So having been obese and going down, trying out a six pack and what that felt like, it was very clear to me that something was different in my brain chemistry.

That’s my background: a lot of different perspectives and I’m bringing all of those experiences together. Really, for me, the motivation for BodBot is to help other people.

Sergio: Ultimately we want to emphasize that BodBot isn’t just an academic exercise for us. It’s not like, oh, maybe this would be cool. I think people might like this neat little thing. This is something that, for us, is our lives. It’s something that has fundamentally changed our lives.

What are your backgrounds?

Sergio: I grew up in rural Missouri, the sun of a Mexican immigrant farmer and a middle school teacher. I ended up going to Harvard (Ed note: graduating with honors) and I also studied karate and worked for Google and Microsoft in my pre-BodBot life.

Eddie: Basically I grew up in rural western Mass. I went to early college at 16 in addition to losing all that weight at 16. I ended up going to Columbia, studied neuroscience there, and started BodBot a few years ago.

What sets you guys apart from your competitors?

Eddie: I don’t know how familiar you are with the industry but most of the apps out there focus on data tracking. Some of them will market themselves as an online or digital personal trainer. For the most part, what you see is a tool that gives you exercises and then a tool for tracking. They’re basically providing a cookie-cutter plan, like a six week ab pack kind of program.

But when you think about the services an actual high quality personal trainer provides, as far as tailoring their recommendations based on not only things like participating but also things like, oh, you have a bad shoulder or you have limited mobility in one area or your stronger in one place than in another. Basically, those kinds of recommendations that are very tailored are what our algorithm does.

Sergio: Yeah, ultimately no one else really models each individual’s body, makes tailored recommendations on that, and then adapts the process.

Eddie: That’s the second part; Sergio’s point. As you perform your workouts, as we get more information about you – whether you miss a workout, complete a workout, exceed our expected rate of progress – the app will adapt to account for that.

Sergio: It’s something that’s not just a static plan. It’s not like, okay, here’s the app, now workout. It ultimately lives and breathes with how the user progresses. 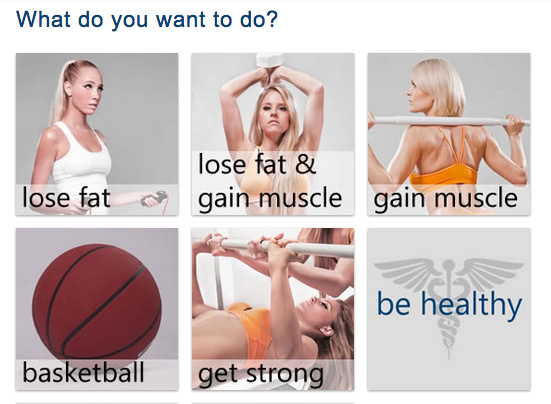 I noticed that you guys had some really impressive funding success. Can you talk about that process?

Sergio: Sure. It seems to be going well. We have a campaign on Fundable, which I guess could be billed as a Kickstarter for startups. We’ve been working with Fundable for the past couple months and that’s gone very well.

We ended up hitting our goal in a week and hit 200% in a month. We figure we can probably hit at least 300%, if not more, by the end of the campaign.

You guys also gained 100,000 users in five months. Was that overwhelming? How did you guys deal with that?

Sergio: In terms of how we’ve handled that, certainly on a psychological level it’s a lot of high-fiving and chest bumps. On a technical level, it’s been a lot of work as far as maintaining our servers and all that.

Eddie: Yeah, it’s usually a quick series of high fives followed by some expletives and then the servers going down. (Laughs) A lot of caffeine and some really hard music bumping.

Do you guys have more people on your team or is it just you two?

It’s just the two of us.

Just the two of you? Wow. Dealing with that kind of growth with only two people is really hard.

Are you thinking of adding on to your team or are you guys going to keep going solo?

Eddie: There’s a lot of work we want to accomplish in the upcoming months and we think we can do that easily and productively together – literally every day, night and weekend. Rather than adding people now and dealing with training them and all of that we’re thinking we’re going to push through til June and see where we’re at then.

What are you hobbies? Or, maybe, what were your hobbies before you guys started with this business?

(Laughs) Sergio: Can we say working out?

No you cannot say working out! Working out does not count for you guys, I’m sorry.

(Laughs) Sergio: Oh man, that’s a tough one… It’s fair to say we don’t have any hobbies right now.

Sergio: The very small amount of spare time we have, like maybe one or two nights a week, we’re just like, oh man, I just need to see my friends. I haven’t seen them in forever.

Well guys, I’ll let you get back to your work, then. Thanks so much for sharing your story with us and I definitely look forward to seeing where you guys end up!

Readers: Help BodBot exceed their funding even further by popping over to their campaign on Fundable and dropping a couple bucks!

Courtesy of the startup founders | BodBot