Is The World Ready For “Speaking Pictures?” VoxWeb Says, “Yes!”

If there’s one things we’ve learned since the invention of smartphones, it’s that human beings love pictures. We love taking them; we love sharing them; we love looking at them. We probably spend more time in our days looking at pictures — either on our phones or computers or on TV – than pretty much anything besides sleep. We’ve figured out more ways to take and share pictures than could have been conceived of in most of human history, and it seems these days that the possibilities are truly endless.

The latest new way to share and consume pictures is an app called VoxWeb. VoxWeb launched a social networking app on both iOS and Android earlier this month. They’re taking the term “speaking pictures” literally by letting users add voiceovers to their images. Rather than struggle with typing out a caption, users can simply say what they want to say about the image that they’re sharing. 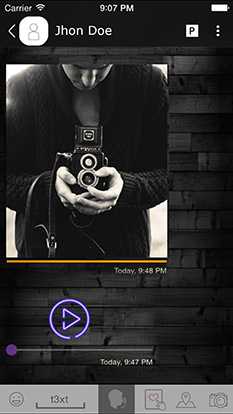 For folks who are more interested in searching for awesome photos than they are in taking them (or, you know, if they’re into both), VoxWeb also offers a social network called “Life,” which is a “follow-following network” that builds off of your existing contacts. Another part of the network is called “Loop,” which is a social discovery tool that brings folks you may be interested in following to the forefront.

VoxWeb “speaking pictures” are characterized by an orange line underneath them. Think of it as their distinguishing mark.

“Nothing captures a moment and fires imagination better than a speaking picture,” founder Yash Mishra told KillerStartups. “Through selfies and group photos in concerts or stadiums to incredible travel pics with mood of streets to emotional selfies and special family photos, speaking pics or vox-pics will enable every internet user to capture and share a moment like never before.”

“Creation has been made simpler, as a user can quickly add voice to an image to give perspective to the pic rather than breaking the momentum with a painfully slow QWERTY keyboard,” Mishra continued. “The experience of consuming a speaking pic is so amazing that after this you would look out for an orange line below any pic you come across. The mind literally swims after consuming an orange line pic.”

The apps and network are still very new, but Mishra told KillerStartups that they’ve already launched in the Americas, Europe, South Asia, and Australia. They have plans to continue the app rollout in Japan and the Asia/Pacific region soon, so keep an eye out if you’re in that part of the world. And if you’re in one of the areas that they’re already present? Get started making your own “speaking pictures” today!