Send Out A TinyShout To Get The Message Out

Have you ever wanted to get a message out to a large group of people but couldn’t figure out the best way to do it? Sure, Twitter is great for blasting your thoughts out into the ether but Twitter is also massive. It covers the entire world and unless you direct message someone or specifically mention them in a tweet, there’s no way to know if the people you want to communicate with are actually going to get your message.

There’s a new app that’s taking on the challenge of communicating with strangers – but they’re doing it in a much more organized way. It’s called TinyShout and it’s an innovative, interesting way to get your messages out there and connect with more people.

TinyShout is both location and time specific. Users send out a message to other users within a specified area, which can be as small as a bar that’s holding a professional networking event or as large as a five-mile radius. The messages all have an expiration date – set by the user – at which point they’ll be unfindable. No more hanging out for eternity on Twitter only to come back and bite you in the butt when you least expect it.

The app also lets users send out messages anonymously or with codes that only go to specific people. So, for example, protesters may want to communicate with each other without the authorities listening in or first responders to an accident may want to leave important messages for each other. TinyShout allows for all of those possibilities, and more. 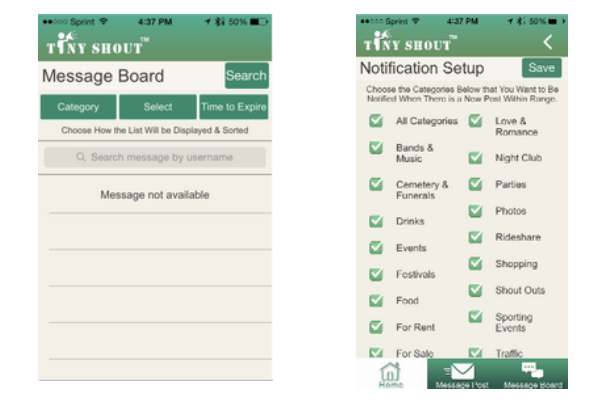 Another awesome feature of TinyShout (and there are many) is the fact that messages can be set for a fixed or mobile point. That means that, for example, tour guides could “leave” messages at certain locations along a route that users could “pick up” as they pass by a landmark. On the other hand, users could have a message that “follows” them and anyone who walks into their proximity with the app would pick up on that message.

Don’t you think the mobile location would be perfect for, say, a networking event?

Finally, TinyShout has a certain built-in serendipity and element of surprise that is simply delightful. I love the idea of happening on a message in the course of my day that has been placed there by another user. There’s something inherently romantic and fascinating about the whole set up.

The TinyShout messaging app is currently available for Android and they’re working furiously away on an iOS version that they’re hoping to release on January 15. Those of you who are on Android, download it here. Those of you on iOS, sign up to be informed for early access here.