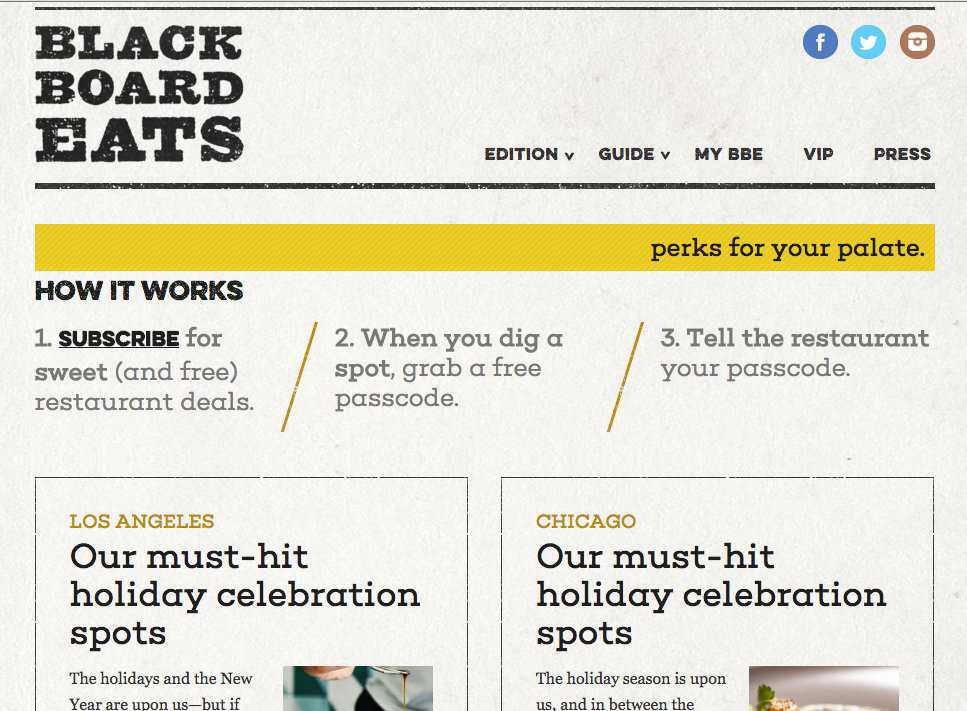 Most restaurant deals turn up slightly undercooked. They’re for restaurants you’re not all that excited about or for dishes you’d never crave. The savings are… okay (still great), but not such a discount that you want to race out the door to get there.

BlackboardEats has a deliciously different approach to restaurant deals. They provide “exclusive deals at top restaurants and on the best artisanal culinary products.” So, for starters, we’re talking deals on great food – and not just at the newest joints in the neighborhood, which somehow gets old fast.

No, BlackboardEats lures you out your front door for the likes of the best Indian eats under $20 in San Fran; an unbelievable fall package of two pizzas, dessert, and a bottle of wine for $40, courtesy of Mozza2Go’s Nancy Silverton; and 30% off dinner at Bounty, one of the darlings of Brooklyn’s Greenpoint neighborhood.

Subscribe to BlackboardEats for free, and when deals come your way that you can’t resist, score a passcode to give participating restaurants to take advantage of time-limited offers.

Not convinced by me? No offense taken. I’ll happily allow the staff at BlackboardEats to entice you to the table. Their editors and writers handpick all of the restaurants to include on the site. Reviews by their critics have turned up on many of the most notable publications in the country, including Bon Appetit, Grubstreet, Zagat, The New York Times, and the Chicago Tribune.

As the website puts things: “If you see it on BlackboardEats, you know it’s first-rate. We don’t bother with anything less—and we wouldn’t expect you to either.” I know I’m an easy target. Great deals and great writing never fail to whet my appetite. Do yourself a favor though, and check out this funky and fab “specials board.”