Think The News Is Boring? Partialpress Will Have You Thinking Again

KillerStartups > Startup Reviews > Think The News Is Boring? Partialpress Will Have You Thinking Again

If you’ve been paying even a little bit of attention, you probably know that the media is in transition right now. While we used to all get our news from papers that were delivered to our doors every morning, most of us now to turn to the internet to find out what’s going on in the world. We have specialized news sites, Facebook, Twitter, traditional news sites, and — oh yeah! — television news. However, even with all of those options, it’s safe to say that no one knows yet what the next dominant medium will be for news. What will replace the traditional newspaper?

While that’s kind of a scary prospect, it also means that we’re in this really cool time where there’s room for lots and lots of experiments. News is no longer the dry print on a page that your dad read while you waited for him to be finished with the funnies. Instead it’s a dynamic, fascinating thing.

One company that’s experimenting in the news space is partialpress. Partialpress turns consuming and sharing news into a fully dynamic experience by essentially turning users into reporters. Now, I don’t mean on the ground, citizen reporters — that’s more Twitter’s territory. No, users on partialpress “adapt” the news. 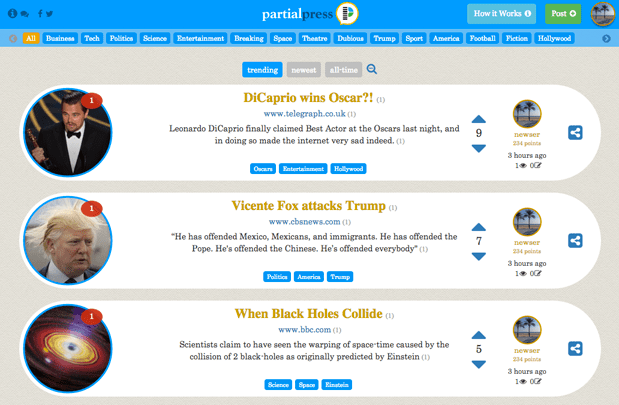 Since that’s probably a new term for you, let me explain how it works. Users on partialpress find a news story that they think is interesting, post it on partialpress, create their own headline and summary for it, and add an image, if they want to. While that might be enough for some websites, partialpress doesn’t stop there. In fact, the adaptation part is just the beginning.

The next step for those adapted news stories is to hit the homepage of partialpress, where it will be automatically entered into a mini-contest looking for the best headline, summary, source, and image for each news story. The community then has a chance to adapt each story, adding their own input, and then voting on the best version. That final version ends up being the one that represents the story on the homepage.

Pretty far from that boring old newspaper, isn’t it?

Today’s media landscape is crowded, with everyone vying for the reader’s attention. Partialpress addresses that huge problem by transforming the reader into a participant, which is a pretty slick move in this age of distracted attention. Curious to try it out yourself? Head over to partialpress and start adapting the news today!