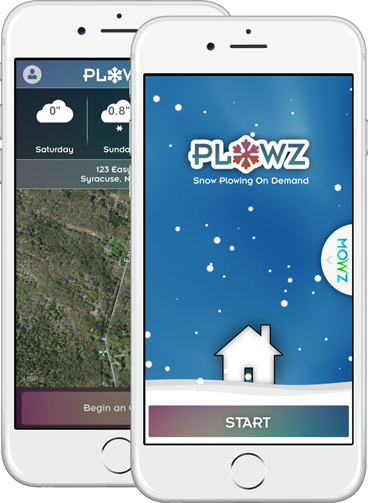 The Northeastern part of the country has already been slammed a couple of times this winter with massive snowstorms. Beginning with Buffalo’s record near seven feet of snow and, more recently, the massive nor’easter that struck New England and upstate New York, it’s pretty much assured that this is going to be a long, white winter.

That’s great news for PLOWZ, a slightly more than year old company that provides on-demand snowplowing services. Started by two Syracuse grads in November of last year, PLOWZ has grown their fleet of plowers from just eight providers in Syracuse who had to be cajoled into trying out the brand new service to more than 1200, ranging from Boston to Anchorage.

PLOWZ was put to the test during the Buffalo megastorm when they harnessed their fleet from as far away as Cleveland, Ohio, and Syracuse, New York, to dig out snowbound Buffalo residents. The company’s PR rep, Dan Lopez, told me that they pulled out the mass dig-out without a hitch, freeing hundreds from their snowy confines.

The app’s genius lies in its Uber-like simplicity. Once you’ve put in all of the necessary data (name, address, driveway size, etc.), all you have to do is tap the Schedule A Plow button, let them know what time you need it done, and sit back and wait for the plower to show up.

When the driveway is clear, PLOWZ automatically bills your credit card. They’ll also send you a picture of you’re cleared driveway, which lets you check it out from anywhere – and provides proof that the service was satisfactorily completed.

The MOWZ app functions in exactly the same way but instead of a snow plow, someone will show up and mow your lawn for you.

Both PLOWZ and MOWZ are currently available in 34 US cities and the company is in the process of expanding nationwide. If you’re interested in joining their team of providers click here and if you want to get on-demand plowing yourself, click here.