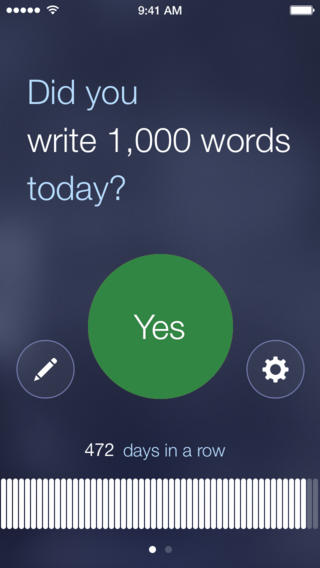 “Commit is a simple app that helps you form habits.”

Forming new habits – from quitting smoking to sending out more sales emails every day – is one of the hardest things you can do. The human brain is naturally inclined toward Newton’s First Law: “An object at rest stays at rest and an object in motion stays in motion with the same speed and in the same direction unless acted upon by an unbalanced force.”

That “unbalanced force” is your decision to make a change in your life but it’s hard to push against the instinct to, well, stay at rest. However, making changes is the only way that any of us move forward toward our personal and professional goals. You don’t want to work out but you need to – but that need isn’t enough to get you to do it.

Some sources say it takes three weeks for a new habit to lodge itself in your brain but getting to those three weeks can be hella hard. That’s where Commit comes in.

Commit lets you input an activity that you’re committing to every day and then keeps track of the days you do and don’t do it. The app lets you build “chains” or series of days in a row that you’ve done your activity. Not breaking the chain adds one more incentive to help you make sure you practice your new habit, even on the days you don’t want to.

The app is simple but for those of you who just need that one extra little push to help you build the habits that you need to meet your goals. Push against Newton’s Law and get started on the path toward building good habits today.

Having trouble meeting those New Year’s Resolutions? Check out #Commit by @nathanbarry