Would anyone have guessed that a campaign to make potato salad would become one of the more controversial projects on the Kickstarter platform? Only online, right?

If you haven’t heard already, Zack Danger Brown set out to raise $10 so that he could make potato salad. Yes, you are reading that correctly. “Basically I’m just making potato salad,” his Kickstarter reads, “I haven’t decided what kind yet.”

With 66 hours to go before the August 2nd deadline, the total amount pledged has reached a starchy $52,901 dollars. Again, your eyes are functioning properly. 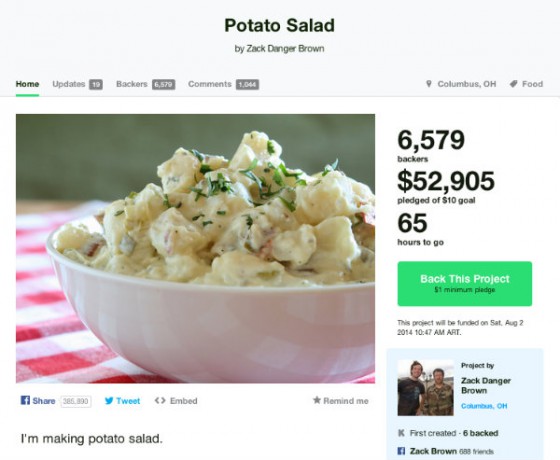 Along the way, contributions went above $70K only to lose $30K overnight. This loss prompted speculation that a picture change, featuring a more gourmet potato salad, had sparked a flurry of retracted pledges. (In fact, 3 large pledges didn’t pass Kickstarter’s review.) Danger Brown appeared on Good Morning America. And one hell of a potato salad party is now in the works.

So what gives? Does the Internet just love potato salad, a joke, both?

Perhaps even more amazing than the campaign itself is the conversation that’s followed – cries that this stunt will provoke a tidal wave of ridiculous campaigns, others defending Brown as brilliant, sincere, hilarious; demand for the money to go to charity but then fear that this would break Kickstarter rules followed by speculation as to the tax ramifications of keeping the money…

The commentary goes to show how little has been decided about the proper use of the Internet stage or how best to harness the forces of the crowd.

Brown has invited the entire Internet to a potato salad party (or pizza, or whatever, dare I ask if it matters?) as a result of the windfall. I wouldn’t presume to know what it all means. Maybe generations from now, the significance of the Potato Salad Kickstarter by Zack Danger Brown will still be a hot topic in varying academic fields.

For the time being, perhaps in the spirit of the humble yet versatile tuber, I return to an ordinary observation: We’re all invited – to test our projects, stretch our wits, dream our dreams and inventions, and maybe discover that there are a bunch of people we might not otherwise ever reasonably expect to meet who dig what we’re doing.

Some may call us ridiculous, others genius. Who knows?

I wouldn’t throw earnestness out the window just yet. Kickstarter campaigns that are well-thought out and executed – ones that offers enticing awards, that target an existing and somewhat sizable audience – stand a better chance of succeeding. But who knows what will strike a nerve or when?

Let the marketers and viral content creators and bloggers and the rest of us keep  grasping for truth, and debating whether or not paprika belongs in the potato salad.