DIY Robotics: Build a Robot That Works On Raspberry Pi With gigabrainIO

If you’re someone who loves art and robotics and interested in building a robot you can run off Raspberry PI and control with your mobile device, gigabrain.io can make your dream come true. gigabrain.io lets makers create and share movements with their robot using a mobile phone touch interface by installing the controller application to a Raspberry PI and running it to send PWM control signals to multiple servos with gesture controls.

gigabrain.io is a collaboration of progammers, artists and fellow robotic enthusiasts, and combines techniques from computer game development with robotics and IoT. Their aim is to make robotic controlling easier and more accessible. With the gigabrain.io platform, you can easily make 3D-printed parts or ready-made robots that move, with your own unique style. gigabrain.io also hopes to create a communication path between robots to generate and improve their movements using AI techniques.

Recently, gigabrain.io released a new feature: a movement library where you can share your robot’s movements with friends using your mobile phone and a Raspberry Pi. You can run and analyze the movements in the library and you can tag the movement’s configuration. The feature is in open beta stage and will be released by the end of 2018. gigabrain.io also currently has a demo where users can send movements to a robot like one would send a text message to a friend using a messenger client.

Additionally, gigabrain.io sells artwork – all of their Instagram images with #art tag are available for purchase as an unique digital painting.

If you’d like to make a moving robot with your own unique style, gigabrain.io’s new open beta is currently available. gigabrain.io charges $17 for users to purchase the GigaBrain License, all source code, and easy install instructions for all the applications as well as any and all updates. The applications include GigaBrain robot controllers and two games: Royal Treasure Island and Slingshot. 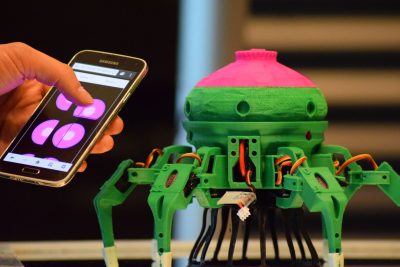 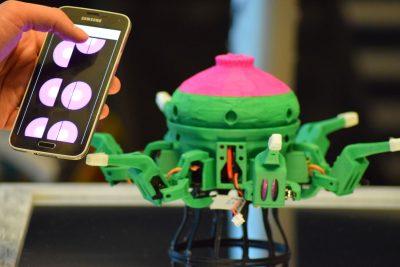