You’re Never Going To Send That Pic. Share It With FotoSwipe Intead 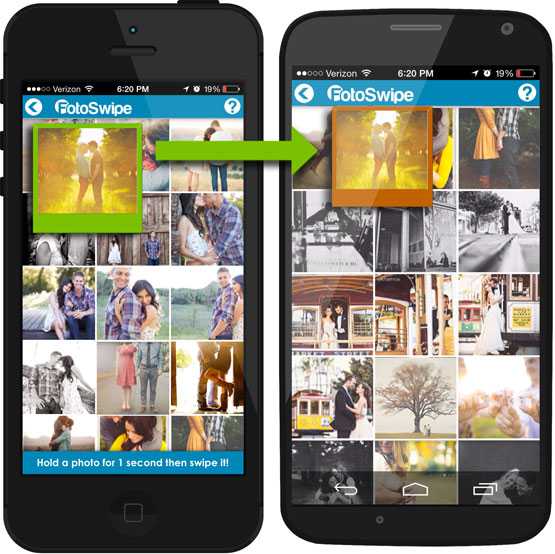 FotoSwipe lets you share photos with friends by swiping them between phones.

With the invention of digital cameras and then the subsequent explosion of smartphones, we’ve all started taking the same damn photo over and over again. Seriously, how many times have you stood in an awkward group pose while the same pick is snapped again and again, on ten different phones? Why do we all need the same shot taken individually on our phones! It’s not like anything is changing!

The reason this annoying habit persists is that – despite having approximately a million different ways to share with each other – we never do share photos. For real though: When’s the last time you shared a group shot with the entire group? Probably never.

With FotoSwipe, though, we may all finally be saved from cramped legs and forced smiles as we crouch down in front so that all fifteen people can get a tortured picture of us on their smartphones. (I think maybe my true hatred of group photos may be showing through here…) One person can take the photo, and, as long as everyone has the app (available on Android and iOS), all you have to do is place your phone next to theirs, open the app, and swipe it onto their phone. That’s it! That’s all you have to do! No messengers or emails or even Airdrop. Just swipe and they’ll automatically have the pic copied to their library.

So please, boys and girls: spare your loved ones the ignominy of the drawn-out group pose and get swiping with FotoSwipe. Boom. So easy. Group photos just got 80% faster, and my enjoyment of them just went up by 40% as well.

You NEVER remember to send over those group pics. Swipe them over instantly instead. @FotoSwipe