CamSurf Is A Family-Friendly Version Of Chatroulette

KillerStartups > Reviews > CamSurf Is A Family-Friendly Version Of Chatroulette

When Chatroulette launched in 2009, everyone was excited about the prospect of connecting with random people via video. The site had impressive, rapid growth, as more and more people hopped on to see what this new phenomenon was all about — the New York Times even called it “intensively addictive.” However, as the site grew, it became known as the spot for people who were there for sexual exhibitionism, and it quickly became clear that it wasn’t a “family-friendly” environment.

And that’s where CamSurf comes in.

“CamSurf is leading the way in family-friendly video chat,” says co-founder Peter Zeldin. “Our platform is among the fastest chatroulette platforms online. We have a consistently high number of users, and our team of moderators ensure that chatting on CamSurf is safe, friendly, and fun for everyone.” 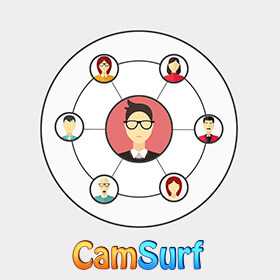 “We thrive on innovative ideas such as the implementation of ‘Safespace’ – an anti-cyberbullying campaign designed to help users of our service who feel isolated or concerned about online bullying,” Zeldin told KillerStartups. “With many more innovative ideas in the pipeline for 2016, CamSurf is the most exciting chatroulette platform online!”

The site currently boosts tens of thousands of users, with as many as 40,000 users online at any time. Their lightweight platform makes it super easy to connect — all you have to do is go onto the site and allow it to access your microphone and camera. Once you’ve given that permission, you can instantly connect with a random person anywhere in the world or in a specific country, if you utilize their filters. They’ve also just launched an Android app that has been downloaded over 10,000 times already, and boasts an average rating of 3.5 stars from almost 2,000 reviews.

Interested in connecting with new people in a nudity-free environment? Want to learn a new language or just make a new friend? Head over to CamSurf and get started chatting now!