Save Your Bacon. Let The Whitetruffle Pig Find The Perfect Job

Some people think of jewelry when they think of gold. I think of food, as in white truffles, those rare aromatic delicacies that must be discovered using special dogs or pigs. If you’re a business owner, you might think of the perfect employee when you think of gold. Or white truffle. What do I mean by that, you ask? 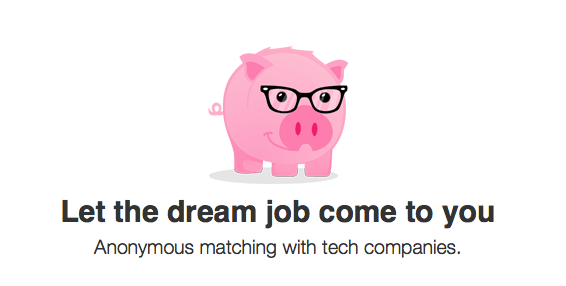 Whitetruffle is a matchmaker for tech companies and job seekers. The company began much like a traditional recruiting service, collecting a fee when a position was filled successfully. When prohibitive costs deterred early users, Whitetruffle listened and responded. They altered their business model, and now allow companies to run their first listing for free and then pay for additional postings. The job-matching tool is free for job seekers.

Let the Pig Do All the Work!

Job seekers create a profile. An algorithm (or truffle hunting pig) then immediately attempts to pair job openings with potential candidates. Job seekers remain anonymous until both parties agree to a meeting. Like the unusual tactics employed to forage those precious foodstuffs, Whitetruffle operates somewhat askew.

Conventional wisdom in the time of social networking favors referrals and connections for filling very particular startup roles. The anonymity of job seekers squashes that prospect right away. Instead, the company is first placing faith in its algorithm. Secondly, 50 percent of hires so far have been people who already had full-time jobs. This is how whitetruffle digs up buried treasure. It fills positions with candidates that might not have taken the time to fill out applications or actively sought a position with their new team otherwise. Whitetruffle unearthed the interest for them.

Treasure Without the Hunt

Whitetruffle spares companies the pain of sifting through unqualified or irrelevant candidates. Job seekers benefit from having their credentials in wider circulation. This saves the time spent filling out redundant applications or poring over job boards. Whitetruffle also affords the opportunity of hiring employees for positions they might not have considered or seen listed.

As someone who’s usually been on the employee side of the lines and detests looking for work, this model appeals to me immensely. I like the idea that my effort to fill out a profile generates multiple opportunities. And work situations are never static. Never hurts to know who is interested or what type of employer values your skills at times when happily employed and not on the prowl. 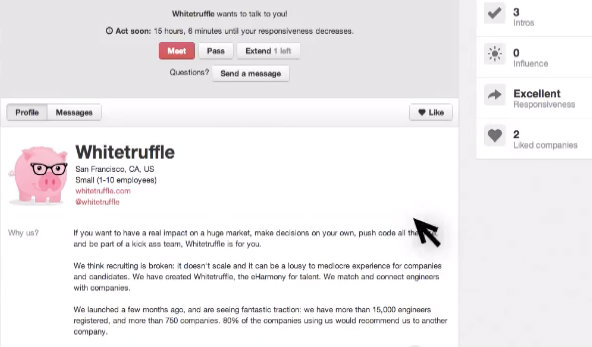 Alex Dévé is the Co-founder and CEO of San Francisco-based Whitetruffle. In beta, the startup quickly added 2,000 companies and 30,000 job candidates to its database. While the focus has been on matching tech talent with companies, don’t be surprised if their interests expand – Whitetruffle raised $1.2 million in funding from Jerry Yang (of AME Cloud Ventures) and other angel investors.

October is the month of the white truffle festival in Alba, Italy. It’s the perfect season to fill job openings with the dream employees. Why dig so hard? Consider letting Whitetruffle’s “beloved mascot… sniff out our truffles and match them with their new homes.”