What happens after crowdfunding victory? Do successfully backed projects – fueled by tremendous publicity and new cash–keep flying toward even greater fame and fortune? Sadly, the opposite usually happens. After the hype fades and the push toward fundraising goals ends, sales start to drop. Entrepreneur Matthew McLachlan experienced this ride firsthand and saw an opportunity to help alter the trajectory of other innovators.

Along with his brother Mark, Matthew McLachlan co-founded TinyLightbulbs, a platform to support dreamers before and after the crowdfunding surge. The company’s focus is on the little guy (startups and individuals) who needs assistance preparing great ideas for the big stage. TinyLightbulbs provides a marketplace for post-Kickstarter products, giving inventors a place to keep their goods in the spotlight and fans the means to continue supporting their favorite projects. The brothers were kind enough to light up the pages of KillerStartups by telling us more about their electrifying efforts. Check out our full interview with entrepreneurs Mark and Matthew below.

At TinyLightbulbs, we believe that EVERYONE has great ideas for projects, inventions, etc. Crowdfunding platforms like Kickstarter have given those people a chance to make those ideas into a reality. The name TinyLightbulbs plays off of the concept that the ideas that are showcased on our site are seen by us as “lightbulbs”. We chose the name TinyLightbulbs to speak to the fact that these ideas have come from individuals who, for the most part, are everyday people without the backing of large corporations. In other words,

We have a brainstorming session each morning where we think of ways to improve both the company and what we offer. We also like to brainstorm about our own product ideas, as we feel that this gets us in touch with the mindset of the innovators behind the products on our site.

We started with two and while there are still two of us, we are now contracting out different fields of work, such as web development and marketing–we are rapidly growing, and there’s always work to do and not enough hours in the day.

As the backend functionality of our site is fairly complex, we needed a shopping cart platform that would meet our demands. After launching, we quickly realized that the platform we began on was too rigid and would limit our growth. This caused us to have to shift all of our data over to a completely new platform and rebuild from the ground up. As I’m sure you can guess, it was a hard decision to make, as we had already spent countless hours and resources on the initial site. But we are glad that we decided to pivot when we did, as it would be much more difficult to do so at this point.

One of the first things we do when facing a frustrating situation is look at whether or not the issue at hand is something that can be influenced by us. If it’s completely out of our control, we do our best to sit tight and smile our way through it. On the other hand, if it’s something that we can change, we’ll have a meeting and discuss what can be done.

The most recent experience we’ve had in this context actually consisted of a positive thing as well as a frustrating thing. After having been featured in a couple prominent articles, TinyLightbulbs received an influx of traffic far higher than what we typically average. This led to sluggish load times and issues maneuvering the site. We quickly became aware of the problem, and decided that it was something we could address immediately. Long story short, we ended up increasing our bandwidth significantly in order to better cope with our ever-growing increase in traffic.

As we mentioned, we definitely like to spend time each day brainstorming, so we take a less traditional approach to how we handle our workspace. We prefer the atmosphere to be more on the relaxed side, while still maintaining the focus and drive we have for the task at hand. Our décor is minimalistic, and we like to decorate our office with Apple products.

While at times it’s difficult to look far ahead, we see TinyLightbulbs as having evolved into a company that is the go-to site for both inventors that want to sell their products after being crowdfunded and for customers that want to find their favorite crowdfunded product for sale.

In the short term, we are working on getting a rapid prototyping machine set up in our office so that we can truly assist inventors in every way, both before and after Kickstarter. What most people don’t realize is that for a product to become “Kickstarter ready” it often takes a couple thousand dollars at least just to complete the prototyping process. We plan on providing this service to innovators completely free of charge.

As for expanding our services post-Kickstarter, we are currently developing a partnership with a national sales team that works directly with big box stores, which will ultimately allow us to assist inventors in getting their products on the shelves, as well as on TinyLightbulbs.

Who or what inspires YOU? Role models? Quotes?

As our entire company thrives on furthering the creativity that has come about through platforms such as Kickstarter, it’s pretty safe to say that we’re inspired by the innovators behind the products on TinyLightbulbs. When an innovator who is currently getting funded on Kickstarter reaches out to us, wanting to set up their product on TinyLightbulbs, we get excited at the prospect of becoming a part of their story. The partnerships we’ve formed with the many individuals currently selling their products on TinyLightbulbs have been invaluable to us and remind us why we’re around.

While it would have served as a poetic beginning to TinyLightbulbs, we were not actually started using funds from crowdfunding. Instead, we self-funded the company from day one, and later transitioned into funding it via the various revenue streams we currently have today.

We’ve found that one of the most crucial characteristics a startup can have is the ability to be flexible. Especially in the early days of a company, you’re going to have a decent amount of curveballs thrown at you. Whether those come in the form of finances, lack of visibility, or whatever, it’s vital to be able to respond quickly and move forward from each one. You’ll never be able to prepare for every possible scenario, but how you approach it in the moment can have huge consequences, either positive or negative. 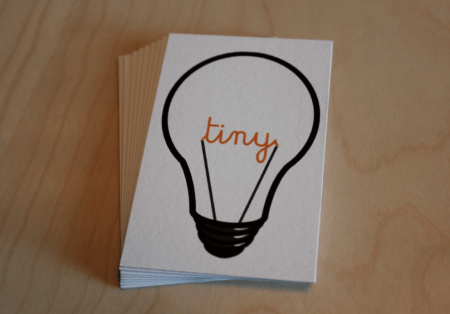 What would you be doing if you had one year off and $500,000 to spend (and you couldn’t spend it on your current startup / projects)?

If we can’t spend it on business ventures, we would tour America–in the skies. We have always been infatuated with aviation and the options for Eco friendly sports planes are increasing. There is a plane called the “Icon A5” that can land on land or water and runs on regular unleaded gas. Yep, that would be an amazing year.

In short, yes. Matthew has had two successful Kickstarter projects (the SoundJaw and SoundJaw Unlimited). As far as TinyLightbulbs goes we have been overwhelmed with the response from the crowdfunding community. We don’t think any true entrepreneurs are ever completely satisfied with their endeavors and will always be trying to improve.

Sites like Kickstarter, Indiegogo, and RocketHub. We kinda base our business model on their success.

Matthew: Tinywings… I don’t know why, but right now I’m obsessed. Mark: Plague Inc. I know it’s a pretty dark concept for a game, but the entire app is executed brilliantly.

*Both Matthew and Mark: For a more productive app, we both enjoy Business Model, an app based on the Business Model Canvas, which allows you to visually map out your entire business model.

Both? If I had to pick one it would be dogs.

iOS, even though we like how “open” Android is, Apple’s App store is number one.

It fills a need. When we speak to project inventors there is a consistent theme: sales drop rapidly after their project is funded. Sites like Kickstarter and Indiegogo provide invaluable (free) marketing and visibility for these products. Once the honeymoon is over, the innovators are left to fend for themselves. We are here to end this dilemma.

As far as our customers go, we provide a place where they know they’ll be able to find completed Kickstarter and Indiegogo projects, and they can stay up to date on the crowdfunding scene. 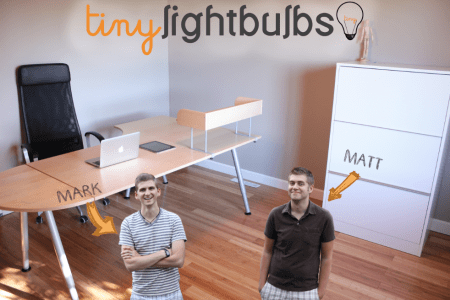 Where can our readers get ahold of you?

We frequently have giveaways for crowdfunded products that can be entered into here by liking us on Facebook or following us on Twitter.

Along with the catalog on TinyLightbulbs, we also maintain a blog on the site, which covers the latest news in the crowdfunding industry.

What are some more things you’re offering in the near future to increase visibility for your site and the products you represent?

We take a portion of our revenues and pump it directly into backing projects on Kickstarter and Indiegogo. We pride ourselves in being actively involved in the entire crowdfunding experience, and love that we can help fund the very products that end up on TinyLightbulbs.

As for advertising, we’ve taken out ads in iPhone Life magazine, Modern Dog magazine, and Macworld magazine. Our aim is to reach as many individuals as possible and get the word out that if you’re looking for that crowdfunded product you once saw on Kickstarter or Indiegogo, you can buy it on TinyLightbulbs.

In addition to this, we’ve formed a sort of co-op among several of the products we have on TinyLightbulbs, which is allowing us to attend large events such as Macworld Expo in January. Matthew knows firsthand how difficult it can be for a single product owner to spend $7,000+ reserving a booth at events like Macworld. And once that money is spent, it’s difficult to make it back in sales over one weekend. Knowing this, we wanted to give more product creators the opportunity to get their innovations out there, which led us to the idea of bringing together multiple products that can be found on TinyLightbulbs and attending as a team.