How To Hustle Your Way Into An Accelerator

Two months ago, Benjamin Evans was wrapping up a grueling month of pitching to Silicon Valley investors and considering what his next move would be. It seemed like all signs were pointing toward leaving the country with me – his girlfriend and media outreach pro – where a less expensive lifestyle could be found.

Today, both Ben and I are sitting with our CTO Nicolas “Nico” Parziale at a wooden table in the open converted factory space that is the headquarters of Matter, a media-focused startup accelerator that has pledged $50k, a kickass community, mentorship, and support to Getcast and six other fledgling startups.

How did we go from searching for a new country to bootstrap in to landing an investment and starting down an exciting new path in San Francisco? 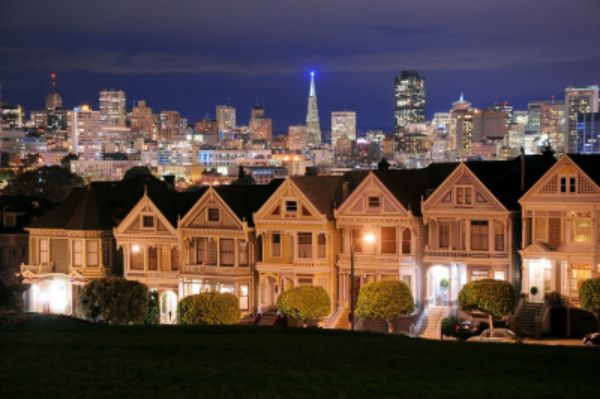 The story starts with Ben happening upon the Matter website while he was browsing investment opportunities in San Francisco. He realized right from the tagline “Change media for good” that this was the perfect accelerator for us to move forward with and further investigation revealed that, yeah, we really needed to be a part of what these guys were doing.

Unfortunately, the application deadline had passed two days before. Super bummer, right? We’d basically missed our opportunity by such a short amount of time that it was almost comical.

Phase I: Break The Rules

While I tend to be more of a rule follower, Ben loves to break them and he has never let something as silly as a hard deadline get him down. A graphic designer by trade, he spent the next day whipping up a slick website imploring Matter to consider us even though our application was late. It had a super cute kitten at the top (because, duh, everyone loves kittens) and ended with a “Don’t click here” link that pulled up a pre-addressed email with Ben as the recipient. 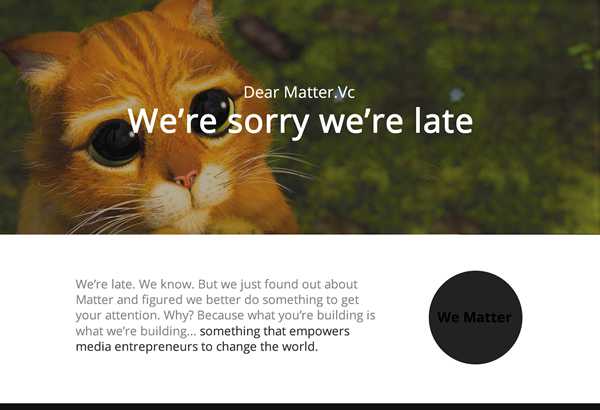 I tightened up the copy, Ben sent it off to Nico, and we moved on to the next step.

Phase II: Get Their Attention

Phase II consisted of reaching out to anyone in our networks or Matter’s networks through social media and email. Each email, Tweet, and Facebook outreach was specifically tailored to the person it was meant to reach and focused on telling both the story of Getcast and the story of why we were late applying and therefore needed help.

Ben tracked it all on bit.ly and found that most of the traffic we generated was through both our personal and professional Facebook pages, although Twitter was a close second. Interestingly, bit.ly also revealed that a few of the clicks came through email, which means that people were reading and reacting to the emails we sent even if they weren’t responding directly to us.

We found out that our initial hustle paid off when we received an email from Matter CEO Corey Ford with the subject “I like scrappy entrepreneurs” letting us know we’d made it past the first round.

After a brutal pitch and another short wait, we got another email informing us that we’d made it to the final round, followed by an extensive outline of the next steps necessary to prove to the Matter community that we were worth the gamble.

Matter had assigned us homework.

Luckily, it’s already been established that we’re hustlers. We busted ass for a week, getting out of the building to talk to our customer base and then synthesizing it in a pretty, cohesive format that we presented a week later during an even tougher interview.

Then we waited. And waited. And waited. When people asked me over the next couple weeks how long I’d be staying in San Francisco my response was, “Maybe?” The way I saw it, either we’d be spending a little more time here, heading out to a new country, or embarking on a new adventure here, all of which were awesome options.

We got the phone call early on a Sunday morning informing us that Getcast had been accepted into Matter. Ben and I celebrated by jumping up and down and then treating ourselves to a delicious fancy brunch, while Nico hustled to get his visas all in order.

One week later we all walked through the garage doors of Matter headquarters together, ready to embark on what promises to be a truly incredible journey. 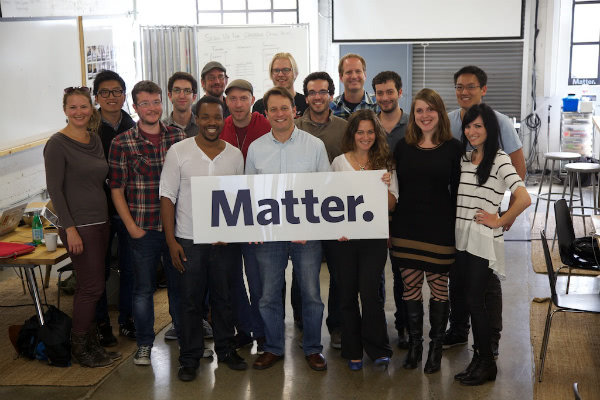