A Latecomer’s Plea To Potential Coders

It’s happening: I’m becoming an elder. Not an elderly person, yet, thank you very much, but an elder – some one who has things to tell to people younger than me that they should listen to when I know that they probably won’t. And I’m not even a parent. I am however ready to become part of that long tradition of folk who have earnestly tried to communicate to untouchable youth, “Don’t do what I did and not pay attention to what others are trying to tell you because you think that they’re all idiots and you’ll never want to be like them.”

You should study computer science and learn to code. Really. Every industry on the planet will remain open to you with this knowledge. It’s the new literacy. It’s the ticket to economic and creative freedom. I made the mistake of thinking computer science was the antithesis of creativity. I couldn’t grasp that it was it’s own language with its own literature per se, and that it had the power to reach into the lives of literally everyone and create profound global changes. What an amazing thing.

Don’t take it from me. Take a look at this video from Code.org. Sports stars, great musicians, world leaders, tech geniuses alike all same the same thing. Learn how to speak the language and there will be unlimited possibilities before you. One of the creators of Facebook, Mark Zuckerberg, makes a very clear case, stating that the only thing limiting greater technology is the lack of people with the right skills and training. Across the board, in any field.

It’s hard to believe that computer science hasn’t already become more firmly entrenched in our educational system given its pervasive presence. Code.org is a non-profit foundation trying to change this, hoping to make computer science part of core curriculums. As part of their efforts, they’re running an “Hour of Code” campaign to introduce 10 million students to computer programming during Computer Science Education Week in December 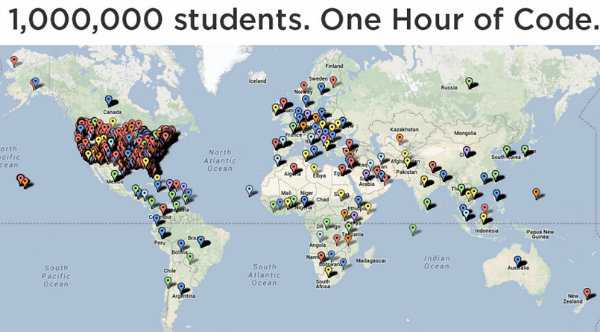 Behind the push to demystify code are Ali and Hadi Partovi, entrepreneurs and investors who have played important roles in companies the likes of Microsoft, Facebook, Zappos, Dropbox, MySpace and several others. Already nearly a million and a half students have signed on to partake in almost 9,000 events for a taste of the basics.

What an inspiring effort. If you care about young people having resources to realize their visions, please encourage them to have a look. If you’re a founder, do yourself a favor and become an ambassador for code: you’ll likely need the help of some budding genius (or many) soon.