Let’s play a game: conjure up an image of the stereotypical technology entrepreneur.

Now, tell me – is the entrepreneur you see in your head a man or a woman?

Odds are, like most people, you associate being an entrepreneur with being a man, despite an increasing number of women joining the party. Nora Poggyi and Insiyah Saeed are trying to change that with their documentary “She Started It,” which highlights the accomplishments of female tech entrepreneurs working on various types of projects.

Both journalists who are passionate about technology and startups, Poggyi and Saeed saw the rise of women in Silicon Valley and made it their mission to give people a different mental image of a tech entrepreneur. To fund their project they went the crowdfunding route and turned to Indiegogo. They not only met their $10,000 goal, but exceeded it by $7,250.

They want to take it one step further than raising awareness, though. After some research, they discovered that only 35-40% of new businesses are women-owned, and that this was mainly because of a lack of exposure and encouragement. So they’re aiming to provide some role models for elementary and high school girls and show them “what it takes” to be an entrepreneur. They explain their socially conscious aim on their Indiegogo campaign page:

The goal is to inspire young women to become entrepreneurs and consider careers in tech, and also educate about how to sustain that career. We believe that a visual connection is a powerful one; by depicting the day to day lives of our subjects on film we hope to inform and inspire others.

In our research we realized that many women feel they do not have what it takes to start a tech company, and even more so build the next billion dollar company. We believe that women can start a company and aim even higher if they believe it possible! Our goal is to create that spark, that by watching we would get someone to say, “if she can do it, I can do it!”

Women are accomplishing great things in the tech industry, and it’s refreshing to see their achievements highlighted. Not to mention how exciting it is to consider the generation of girls this film has the potential to inspire to greatness in the tech industry by letting them know that they, too, can do it. 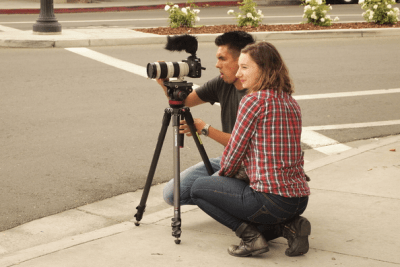 As of their most recent update one month ago, the short documentary is still in production. Updates can be found on the documentary’s Facebook page. For now, check out the teaser.