Star Wars fans will remember that it was the tiniest of openings in the Death Star’s defenses that proved the downfall of the seemingly invincible fortress. Likewise, it might not be as unthinkable as it sounds that we will soon find ourselves using an Internet without a Facebook or a Google or similar giant company. And what might be their undoing, you ask?

For a long time it was simply accepted that data rights and privacy were costs attached to doing business with behemoth brands. That time has passed. Consumers may have swallowed targeted ads, but developments like Edward Snowden exposing NSA practices and the more recent revelation of Facebook’s mood experiment have awakened a resistance in the average user against the wholesale surrender of privacy. 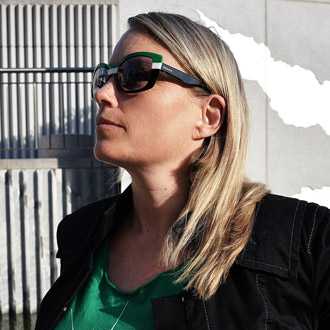 Leading the good fight is Nico Sell, CEO and founder of the top-secret messaging app Wickr. Wickr introduces military-grade security to sending messages. Each communication is encrypted, with content tied to the device rather than an account or individual. Nothing is stored. No information is shared. Users set a clock for when messages are “digitally shredded.”

In essence, text, audio, and video messages self-destruct, leaving no trace – making Wickr arguably the most private and most secure way of sending anonymous communications online.

Already a driving force behind more than 20 security companies, Wickr may well prove to define Sell’s legacy (if not the ever-present black sunglasses). Hot on the heels of a $9 million round of funding, Wickr recently completed another $30 million round led by Jim Breyer. The company’s appearance on the market is timed perfectly.

Sell’s is no crank either. She’s also the founder of the huge hacker gathering DEF CON as well as r00tz Asylum, a nonprofit dedicated to teaching kids around the world how to embrace becoming white-hat hackers. An early boycotter of Facebook, she has established herself as an authority on Internet security.

Even more than privacy, Sell’s is quick to champion individuals having more ownership and control of their data. Companies have traditionally taken it away from users. She’s looking to shake up business models by giving it back.

In an article on Inc., she’s quoted as saying, “I want [Wickr] to replace Facebook and Skype – simultaneously … We’re hoping to create an entire marketplace and have thousands of apps running off Wickr software.”

If given the choice between two services – one that offers protection and complete privacy, and one that doesn’t – who would choose the later? No one, which is exactly what Sells and Wickr are banking on.

The plan is to make money by offering premium services and licensing security technology to other companies. The messaging service is free of charge at this time.

Texting, banking, emailing – offering privacy and security may one day become a standard of each industry just as relinquishing control is at the moment, should we take up arms with Sells.